Some 200,000 women were forced into sexual slavery in countries occupied by the Japanese army 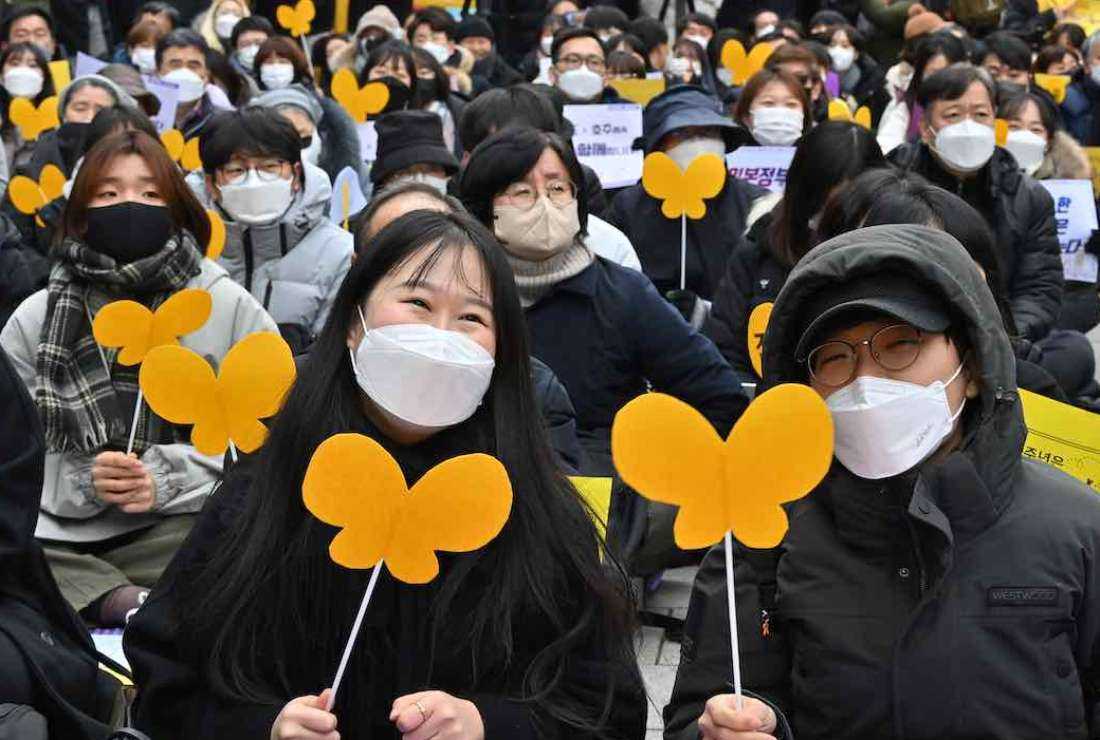 Protesters attend a weekly anti-Japanese demonstration supporting comfort women, who served as sex slaves for Japanese soldiers during World War II, as they mark the 30th anniversary of the protest near the Japanese embassy in Seoul on Jan. 5. (Photo by Jung Yeon-je / AFP)

Catholics have joined the South Korean public to continue a decade-long campaign seeking resolution and compensation for Comfort Women, who were forced into sexual slavery by the imperial Japanese army during the Second World War.

Several victims, their family members, religious, and other Catholics joined for a Mass on Aug. 14, marking the 10th International Comfort Women Day, in the Korean capital Seoul, Catholic Times of Korea reported.

Father Yang Il Sung, chairman of the Justice and Peace Committee of the Diocese of Incheon, who led the mass condemned the current Yoon Suk-yeol government's stand in support of the canceled Comfort Women Agreement of 2015.

The agreement signed by Japan and Korea acknowledged Japan's atrocities, but “it was a hasty agreement” and "it is enough to say that it was humiliating to accept it.”

Civil society groups, including the Justice and Memory Alliance, at a function in Seoul, demanded an official apology and legal compensation from the Japanese government.

Students gathered in front of the Japanese embassy and held a picketing event with printed materials containing the testimonies of the comfort women victims.

The 2015 Japan-Korea agreement was canceled in 2018 by the South Korean government under Moon Jae-in after victims and their families protested the agreement and the compensation.

The protestors wanted the Japanese government to take legal responsibility for the atrocities.

Historians estimate that between 50,000–200,000 women were forced into sexual slavery in countries occupied by the Japanese army during the war such as Korea, China, and the Philippines. Such women also came from Burma, Thailand, Vietnam, Malaya, Manchukuo and Taiwan.

An estimated 80 percent of Comfort Women were of Korean origin.

Many Koreans believe that Japan has still not acknowledged its legal responsibility towards the sex slave regiment that was set up by them.

The issue began to get public attention in 1991 after Hak-soon Kim became the first Korean survivor to publicly speak about the atrocities she faced during the Japanese occupation.

Japan has been demanding to remove the statue of Hak-soon Kim and two fellow victims at Namsan Mountain, but South Korea has ignored it.