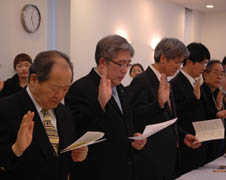 Members of the Pro-life Professors

Professors from various fields in South Korea have launched the “Pro-life Professors’ Association” to oppose abortion. “We will try to promote the respect for life,” said Martin Nam Myeong-jin, chairperson of the association. People today just don’t care about killing the fetus in the womb, said the medical professor of Gachon University of Medicine and Science. The professors in medicine, mathematics, law, bio-ethics, music and philanthropy said in their statement today that it is their responsibility as intellectuals in Korean society to condemn abortion. “Beyond the religions, the matter of life is very important and we will exercise our influential power in taking away the trend that makes light of life,” said Kim Joon-il, secretary of the association. Although we are a group of experts not based on a certain religion, 80-90 percent of the members are Christians, said the math professor from Yonsei University. The group also asked the Korean government to revise the Mother and Child Health Act that regulates abortion with exception to certain cases. According to the Ministry of Health and Welfare’s survey, 350,000 cases of abortions, mostly illegal, are recorded annually in Korea. “It’s good to have such voluntary life movement organization. It will be a good help to the Church’s life movement,” said Father Casimir Song Yul-sup, secretary of Pro-life Activities of the Catholic Bishops’ Conference of Korea. The professors plan to support the life movement through scientific studies. Related report Korean Church confronts proposed abortion discussion KO12936.1637