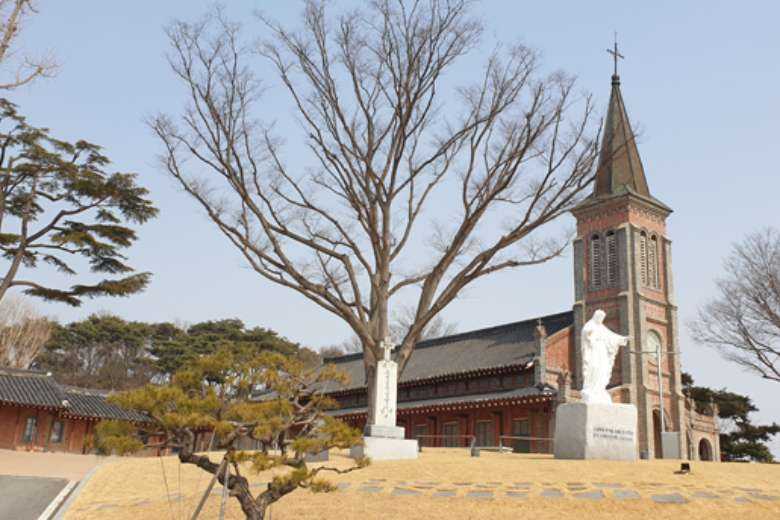 Easter in South Korea comes at a time when nature breathes new life, just as the celebration of the Resurrection of Jesus invigorates faith life for Christians.

It is an exciting time of the year when new branches adorn trees that lost leaves in winter, and flowers bloom aplenty. For many South Korean Catholics, it is a custom to visit Catholic shrines and pilgrimage sites.

Nabawi Catholic Church is a major Catholic pilgrimage site that draws many pilgrims all year round.

The church is a tribute to the first native Korean Catholic priest, St. Andrew Kim Tae-gon (1821-46). He landed in the area on his return from Shanghai, China, on a boat with groups of foreign missionaries in 1845, shortly after he was ordained a priest, Father Emilio Jung Ung-mo, in charge of sacred art in Seoul Archdiocese, wrote in the Korean-language Catholic Times of Korea on April 17.

Andrew Kim played a pivotal role during the early days of Catholicism in Korea. While he preached and evangelized himself, he also helped foreign missionaries to enter Korea secretly though a naval route by evading border patrols.

Royal forces of the staunchly Buddhist Joseon dynasty arrested, tortured and killed him by beheading near the Han River near Seoul in 1846. Pope John Paul II made him a saint along with 102 Catholic martyrs during his visit to the country in 1984.

Nabawi Church has 14 Way of the Cross stations in St. Mary’s Garden to allow pilgrims to pray and reflect on the suffering, death and resurrection of Jesus

Nabawi Church in Iksan in North Jella province in southwest South Korea is one of the country's oldest surviving Catholic churches. French missionary Joseph Vermorel from the Paris Foreign Missions Society (MEP) built the wooden church in combining Hanok (traditional Korean house) and Gothic architectural designs on a plain field in the middle of a beautiful, bowl-shaped volcano.

In 1916, the church’s wooden walls were replaced with brick walls to make the church more robust.

Nabawi Church has 14 Way of the Cross stations in St. Mary’s Garden to allow pilgrims to pray and reflect on the suffering, death and resurrection of Jesus and to remind the faithful about the persecution of Christians in 19th century Korea.

The church has two monuments — one in memory of St. Andrew Kim and the other in honor of Father Vermorel. In 1917, a church history museum, also built in Hanok style, was opened to preserve precious items such as church documents, artwork and records as well as relics of St. Andrew Kim. Besides a wooden baptistery, statues of Jesus, Mother Mary and St. Joseph also adorn the church.

Nabawi Church has been recognized as a national cultural property, according to Father Emilio.

Near a large rock at the edge of the volcano stands a model boat named after archangel Raphael. The boat symbolizes the landing of St. Andrew Kim and his companions after a journey from Shanghai on a small wooden boat that tackled rough waves and storms in 1845.

Its sails and mast look like the cross where Jesus was crucified and tells the story of the persecution of early missionaries and martyrs in Korea like St. Andrew Kim, says Father Emilio.

The road leading to the church at the volcano's top has a small tomb where French MEP missionary Father Hippolytus Soucet (1877-1921) lies buried.

Father Soucet was ordained a priest in 1906 and came to Korea, where he served various parishes and held special affection for the Nabawi pilgrimage site.

Before his death following surgery in 1921, the missionary said he wanted to be buried near the church. “I want to lie down while looking at the church on the mountain,” he said. His tomb is located on a hill facing the church.

Church records say Christianity first came to Korea in 1592 during a Japanese invasion. Some Koreans were baptized by Christian Japanese soldiers.

In the late 18th century, Catholicism began to spread as an indigenous lay movement and gained immense popularity. The Buddhist rulers of the long-reigning Joseon dynasty viewed Christianity as a subversive foreign faith and unleashed extreme levels of persecution. In the 18th and 19th centuries, thousands of Catholics were tortured and massacred for refusing to renounce their faith.

From being a faith followed by about one percent of Koreans in the 19th century, Christianity has become the largest organized religion in South Korea today.

According to official government records, about 56 percent of 58 million South Koreans are non-religious, 20 percent are Protestant, 8 percent are Catholic and 15.5 percent are Buddhist.

Some 5.6 million Catholics are spread across three archdioceses, 14 dioceses and a military ordinariate in South Korea.

The church, museum, relics and witnesses of martyrs and missionaries at Nabawi Church remind pilgrims that the Catholic Church in Korea was born with the sacrifices of many, including foreigners who left their homelands to devote their lives to spreading the Gospel in this land, said Father Emilio.

“The seeds of the Gospel sown by the martyrs and witnesses who lived before us are sprouting, blooming and bearing fruit. Through their strong faith and noble witness, we can sing 'Alleluia' while praising the resurrection of Jesus again,” the priest added.