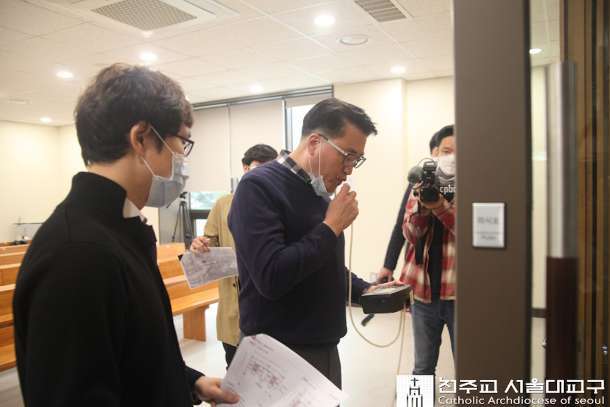 An inspection of the new confessionals at Myeongdong Cathedral.

Confessions have resumed at Seoul’s Myeongdong Cathedral in specially adapted confessionals that will keep both priests and penitents safe from the Covid-19 virus.

The confessionals had been closed since February due to the pandemic as the virus is most easily spread in closed spaces.

The Archdiocese of Seoul reorganized the operating procedures and facilities for confessions to adhere to public health guidelines enacted for the prevention of the spread of the Covid-19 virus, including hygiene and sanitation measures.

The space for the priest and penitent in the confessional booth is now completely separated, while the ventilation system has been modified to prevent transmission of the virus via air.

Furthermore, a sneeze guard made of Plexiglas has been installed in each booth as a physical barrier between the priest and the penitent to reduce exposure to respiratory droplets.

After each confession, the whole booth is to be sprayed down with disinfectant before the next penitent proceeds to confession.

“Our community of faith has been facing very difficult times as the Covid-19 crisis prolongs,” said Father Hur Young-yup, spokesman of the Archdiocese of Seoul and vice-chairperson of its committee for communications.

“Reopening of the confessionals fully equipped with such facilities is a part of our efforts to provide pastoral care for the faithful. To make the crisis into an opportunity, I hope there will be more effective attempts in the field of pastoral ministry in preparation for the post-Covid-19 era.” The new confessionals at Myeongdong Cathedral.