Savings from lavish parties to care for children with chronic diseases 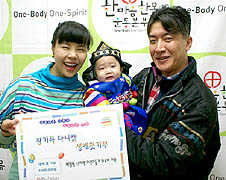 Parents of a baby boy in Seoul have become one of 25 couples this year to join the One-Body One-Spirit Movement (OBOS) by making a donation to mark their son’s first birthday. Teresa Kim Soo-na, 41, donated 2 million won (US$1,789) in the name of her son Daniel Hwang Gi-tuk to OBOS for medical care for children suffering chronic diseases such as leukemia. OBOS, a program run by the social welfare and oversea aid arm of Seoul’s Catholic archdiocese, has been spreading the "first donation of life" project since 2008 by urging parents to donate money instead of holding birthday parties in the name of the babies to promote the culture of donation. According to OBOS, participants for the project have risen from 14 in 2008 and 33 in 2009 to 55 in 2010. In all, some 95 million won has been collected and used for medical treatment of children and supporting young people in other countries. This year, donations have already reached 16 million won. Bona Jeong Moon-sun, coordinator for the project, explained: "Previously, most parents donated the money for a birthday party. But now many parents donate money on the special day like 100th day of birth or entering school." "Also, once parents join the project they continue to donate money in the name of their children," she added. Related  report Organ donation pledges surge after late cardinal´s example KO13033.1638