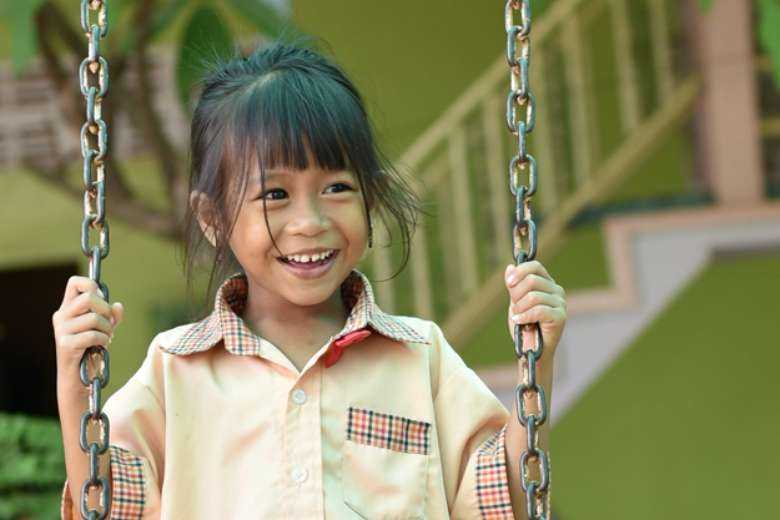 During a recent visit to a village in Pursat province in western Cambodia, Sister Kim Bun-seon was shocked to find no children in several houses.

The children were working with their parents in the fields or doing day labor or domestic chores.

“Parents take their children to work. Here, parents prioritize household chores over education of their children. It's sad but it's an unavoidable reality because they are so poor,” said the South Korean nun from the Religious of Christian Education congregation, an international Catholic religious order founded in France in 1817.

Sister Kim was riding on the back of a motorbike of a Cambodian teacher as she made stops at one house after another.

Finally, she met Mooney, a young Cambodian boy known only by one name. He was busy with domestic chores as his parents were not interested in sending him to school for one reason common among most villagers — poverty.

Mooney replied, “Yes, yes,” when Sister Kim asked in front of his parents if he wanted to go to school to study.

As many parents are illiterate, they lacked enthusiasm to send their children to school

Surprisingly, the nun couldn’t find any of the textbooks she had handed out to the boy during earlier visits. Before leaving, she gave him another textbook and encouraged him to study before joining a school.

Sister Kim’s trips to villages in Pursat are part of an education mission started by she and a colleague in 2010. Sister Kim and Sister Kwak Jeon-hae came to the area covered by the Apostolic Prefecture of Battambang to sow seeds of hope among rural Cambodian children who continue to grapple with poverty and illiteracy.

The Covid-19 pandemic forced the closure of all institutes including schools for months, leaving poor schoolgoing children without an education and vulnerable to becoming dropouts.

Cambodia has made laudable progress in education with a high rate of school enrolment in recent times. According to UNICEF, about 97 percent of children enrolled in primary school in 2017-18.

However, the agency reports that many children fall behind in learning and eventually drop out due to various reasons including not being adequately prepared for school due to poverty, lack of nutrition and the learning environment, experiencing poor teaching and learning, and attending school irregularly.

As a result, UNICEF says, many children fail to reach learning standards appropriate for their age. At primary level, nearly 25 percent of children in Grade 3 cannot write a single word in a dictation test. Only 27 percent of pupils aged 3-5 are developmentally on track in literacy and numeracy, and by the time they are 17, some 55 percent of adolescents will have dropped out of school.

Aware of these adversities, the Korean nuns have been running Our Lady of Mercy kindergarten for dozens of children in Pursat Parish and an after-school study room for elementary, middle and high school students in seven villages, benefiting some 800 children each week.

Besides general education, the nuns also read out children’s books and teach English, singing, dancing, artwork and physical exercise. They also assist the pastor in Pursat Church to offer spiritual and pastoral services to the Catholic community.

Until the nuns came to Pursat, many children didn’t go to school. As many parents are illiterate, they lacked enthusiasm to send their children to school.

Parents continue to prioritize work over education, so it is common to see children working in gas stations or digging for vegetables to sell at the market.

Sister Kwak said she feels sad every time a child drops out of school.

“It hurts every time I see children giving up education because of poverty,” she said. “When I look into the eyes of children, they are really clear and pretty. I am eager to serve my children so that they can grow up with God-given dignity.”

Sister Kwak says she is happy to live with the locals and feel that “this is where God is.” She loves seeing children studying despite facing difficulties in an unfavorable environment.

The nun explained that the financial crisis is the biggest stumbling block to their service. Their services to children mostly depend on sponsorships from generous donors. Due to the Covid-19 pandemic, sponsorship has decreased significantly, plunging their mission into a challenging situation.

“Our children need support urgently. It’s hard to see children give up education because of poverty. We help them as much as we can, but there are limits to our capacity, so I feel helpless,” Sister Kwak said.

Christians in Cambodia form a tiny minority, accounting for about 2 percent in the Buddhist-majority country of more than 16 million. Church sources estimate there are about 20,000 Catholics in Cambodia in three ecclesiastical jurisdictions — one apostolic vicariate and two apostolic prefectures.

However, the history of Catholicism in the country dates back to the 16th century. Gaspar da Cruz, a Portuguese Dominican friar, brought the Catholic faith to Cambodia in 1555-56, according to church sources. The friar didn’t succeed much in converting people to Christianity.

Cambodia became a French colony in the 19th century but Christianity had little influence in the country. Catholics numbered 120,000 in 1953, of which 50,000 were Vietnamese, making Christianity the second-largest religion at the time, according to Vatican statistics.

Catholicism almost withered away due to deadly political upheavals, civil war and the genocidal Khmer Rouge regime (1975-79) when an estimated 1.5 to 2 million people, or about 25 percent of the population, were killed by political executions, disease, hunger and forced labor.

Missionaries rebuilt the Church from the ashes when they returned in the early 1990s following the Paris Agreement that marked the end of the civil war.

The rebirth of the Church in Cambodia allowed missionaries like the Korean nuns to make inroads in the country to provide vital support to poor and vulnerable communities.

Back in Pursat, Sister Kwak remains steadfast to continue the nuns' education mission for poor children.

“I earnestly appeal to more people to join the sponsorship program so that the children's clear eyes and their dreams can be protected,” she said.

* This report uses material from a Korean-language article published by Catholic Times of Korea on Nov. 28 here.