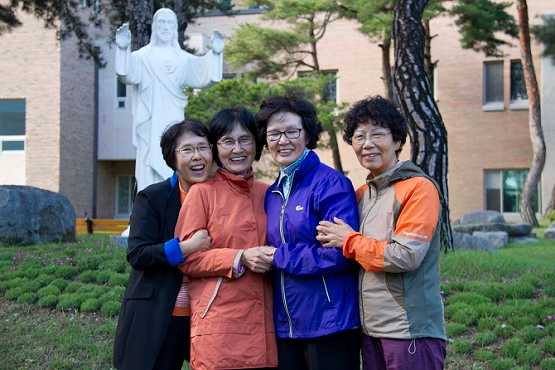 Traveling together for four months, four grandmothers in their 60s and 70s visited all of South Korea's 111 holy shrines.

The four parishioners from Seonsan Church in Daegu began their pilgrimage on May 23 and traveled every weekend completing it on Sept. 20.

Anne Kim Jeong-yeo, 74, the eldest of the four, had the initial idea. "I want to go to all the holy shrines in Korea," she told the other three. "I have longed for more than 10 years. If I don't do it now, I'll never be able to do it."

The other three agreed to the pilgrimage. Angela Kim Yoon-ja, 65, the youngest, was willing to be the designated driver.

They spread out a map of Korea and made a schedule, planning to visit shrines that were located close together. Their first destination was St. Mary's Shrine in Daegu where they participated in a morning Mass and asked for St. Mary to bless their journey.

After they finished, each of them picked different places as their favorites, including the tomb of Hwang Gyeong-han, son of Hwang Sa-young, who wrote an account of the Shinyu Persecution in 1801 which he tried to send to a bishop in China. The account was intercepted by the ruling Korean dynasty of the time and Hwang was martyred for it that same year. After his death, his wife Chung Nan-ju was exiled to the island of Jeju. She had to leave her young son behind.

"I felt the suffering of a mother while listening to the sad story of the martyrs," said Helen Park Hwan-ok, 72.

The Shinyu Persecution was the first large-scale bloody suppression of the new religion by the authorities, which considered Catholics traitors for abandoning Confucianism, the established religion.

Widespread, violent persecution occurred in several spurts throughout 19th century Korea. It is believed that more than 10,000 Christians were martyred during those periods.

Although their pilgrimage has finished, the feeling of the holy places is still alive in their minds and the deep faith of the martyrs made them reflect on their own lives.

Juliana Kim Ok-su, 69, said, "We were on the pilgrimage thanks to God's grace."

Their pilgrimage ended on the feast day for the 103 Korean martyr saints — who were canonized by St. Pope John Paul II in 1984 — at Jinsan Shrine in South Chungcheong province.

Reflecting on their pilgrimage, Anne Kim said, "I felt that God was with us all the time. Although we cannot give our lives like the martyrs, we pledged to follow their faithful lives."

The grandmothers have now set another goal: to visit all the monasteries in Korea. Anne Kim said, "We will do so as far as our physical conditions allows."