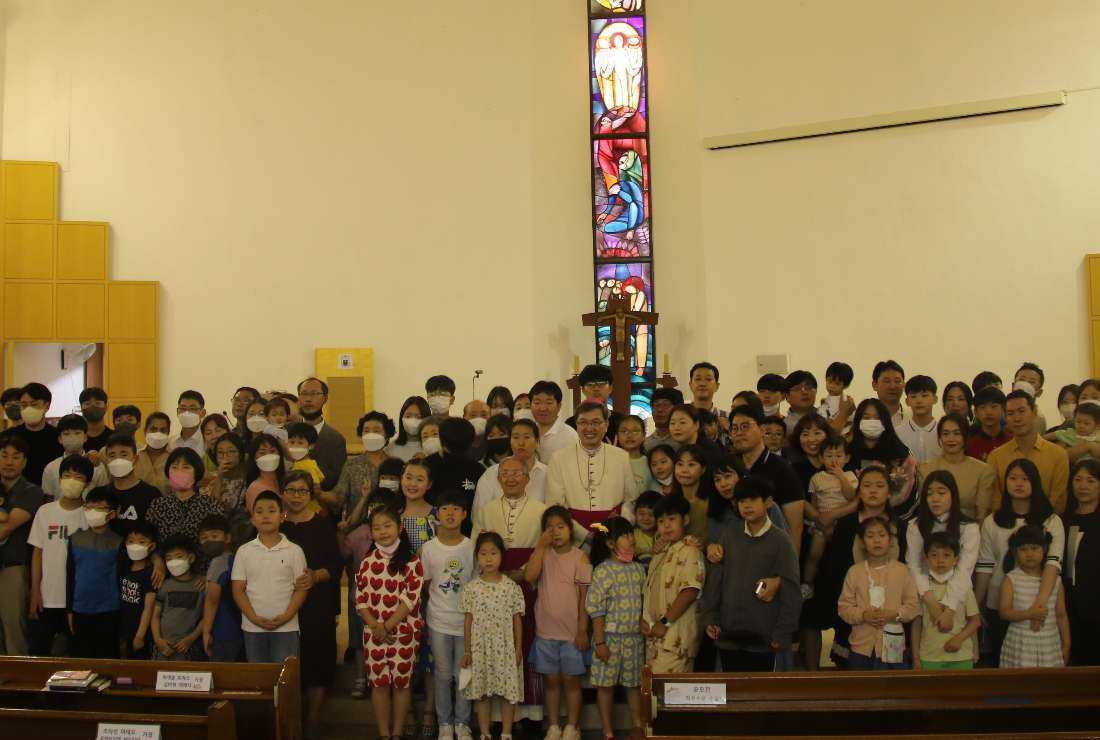 Archbishop Hyginus Kim Hee-joong of Gwangju with families and children after a Mass to mark the end of the Year of Amoris Laetitia Family on June 26. (Photo: CPBC)

Gwangju Archdiocese in South Korea has honored 20 Catholic families with four or more children at a time when the nation is experiencing a negative trend in population growth.

The archdiocese honored the families during a special Mass on June 26 to mark the closing of programs and activities for the Year of Amoris Laetitia Family that celebrates Pope Francis’ famed apostolic exhortation Amoris Laetitia (The joy of love), reported the Catholic Peace Broadcasting Corporation (CPBC).

Pope Francis had declared March 19, 2021, to June 26, 2022, as the Year of Amoris Laetitia Family and asked dioceses across the world to celebrate the year to contemplate the beauty of marriage and Christ's teaching.

During the event Gwangju Archdiocese also awarded nine winners of its My Family Story Contest for the Year of Joy of Love.

Archbishop Hyginus Kim Hee-joong of Gwangju said the Church sees pastoral care for marriage and the family as crucial in a world where family life is in a crisis.

"The crisis of the family is a crisis of society, and the Church emphasized that the only way to heal the pathology of modern society is to promote the integrity of marriage and the family," Archbishop Kim said during his homily.

"Families will be able to participate in the path of following the Lord without delay while witnessing in a balanced way the appearance of families that are proclaiming the Gospel and serving the world."

About 300 Catholics including clergy, religious and laypeople attended the Mass to mark the end of year-long observances of the family year.

The Korean Church’s celebrations came as the East Asian nation experiences an alarming decline in the fertility rate and a rise in its elderly population.

The Korean Statistical Information Service reports that the elderly population in 2022 aged 65 and above is at 17.5 percent (9 million) of the 51.6 million people in South Korea.

It is predicted to rise to 25.5 percent of the estimated total population by 2030 and by then South Korea will become “a superaged society” like Japan and Italy.

The current demographic trends have triggered alarm among social scientists who fear the nation’s economy will be under huge stress without efforts to tackle population decline.

Despite the government’s promised incentives for people who have more children, many in South Korea shun marriage and family life. Official data showed South Korea had an all-time high of single households at 31.7 percent in 2020.

Meanwhile, the Catholic Church has been engaged in programs and activities to promote marriage and family.

For example, Gwangju Archdiocese has distributed a 19-day Action Table consisting of liturgical prayer and practice of love every month, conducted a relay family prayer challenge and supported families that were going through difficult times.