An estimated 32,000 were recorded, up from less than 5,000 before a court ordered a ban to be lifted 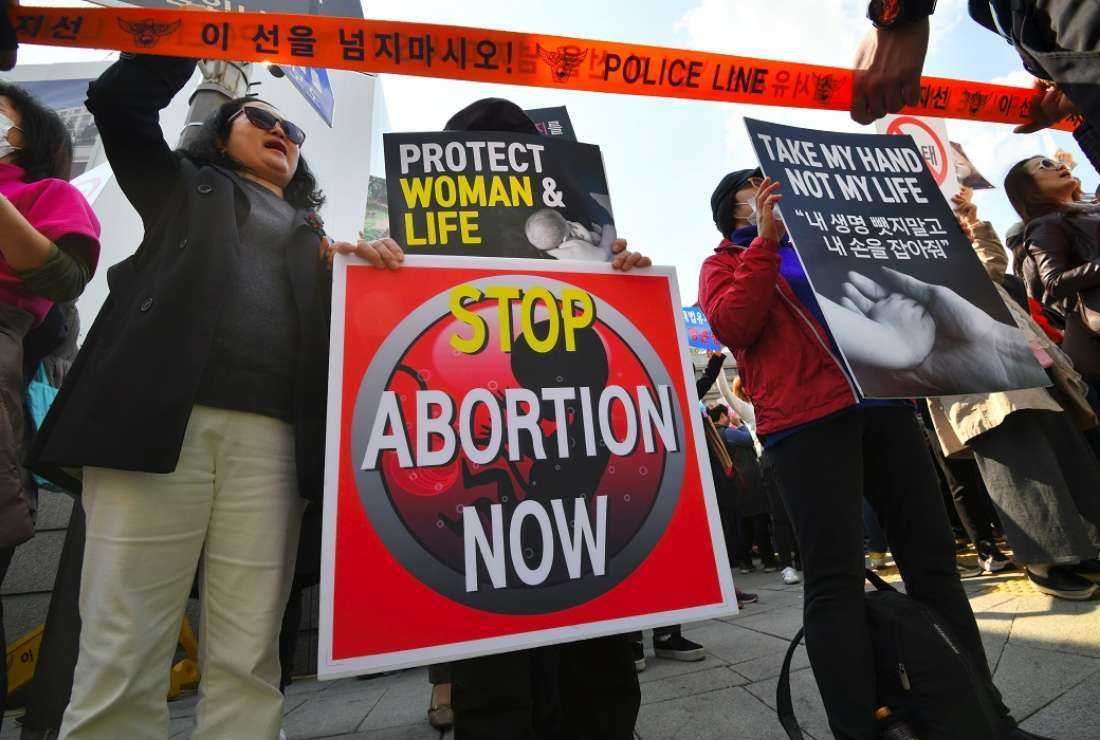 South Korean pro-lifers hold placards during a rally supporting an abortion ban outside the constitutional court in Seoul on April 11, 2019. (Photo: AFP)

The Catholic Church in South Korea has joined pro-life activists in voicing concerns over a surge in abortions in the country after it was decriminalized thanks to a court order about two years ago.

A survey by the Korea Institute for Health and Social Affairs (KIHASA) revealed there were an estimated 32,000 induced abortions in 2020, Catholic Peace Broadcasting Corporation (CPBC) reported on July 1.

Induced abortion refers to the termination of pregnancy through medical procedure within 12-20 weeks of gestation, according to the Science Direct journal.

The average age of women seeking an abortion was 27 in 2020, about 1.4 years younger than the average age recorded in a 2018 survey.

About 92.2 percent of respondents underwent surgery, and 7.7 percent used drugs.

"People should be aware of their fertility and be more responsible"

Father Park Jung-woo, secretary of the Committee for Life of Seoul archdiocese, noted that the rise in abortions is related to people’s apparent lack of responsibility who fail to see life, sex and love as complimentary to each other.

"People should be aware of their fertility and be more responsible. We should educate them more, so they don’t separate life, sex, and love from one other,” Father Park said during a CPBC interview.

The Korean government didn’t explain what factors triggered the sharp rise in abortions. However, observers point out that the rise comes as the nation moved to decriminalize abortion in 2019.

Abortions were banned in South Korea in 1953. However, illegal abortions were common as the law was not strictly enforced.

Pro-abortionists and women’s rights activists called the ban discriminatory as it forced women to seek an abortion secretly, in unsafe conditions, that put their lives at great risk.

South Korea’s Constitutional Court in 2019 ruled that the criminalization of abortion was illegal and ordered the government to lift the ban.

In January 2021, parliament passed legislative measures to decriminalize abortion and to repeal previous laws that banned it.

Korean media has reported that an upcoming law seeks to legalize abortion up to 14 weeks is in the making. The new law would also allow abortion between the 15th and 24th weeks in cases involving rape or incest.

The survey report found that 53.8 percent of respondents admitted that they always use contraception. Out of them, about 40 percent were married women.

Father Park lamented that many Koreans today do not bother about the true purpose of sex and continue to defy sexual morality.

“Sex without the purposes of procreation and sustaining life undermine the essence of sexual intercourse, and unmarried sex, in particular, does not intend to take responsibility for life,” said Father Park.

Education to prevent unwanted pregnancies is the task that the country should do concerning abortion, he added.

The Korean Church has long campaigned for the protection of life and opposed abortion based on the Catholic Church’s stance on the “sacredness of life” that teaches that human life must be protected "from the very moment of conception."

In 2018, Korean bishops launched an anti-abortion petition that gained one million signatures. The Church has also been organizing March for Life, a pro-life rally campaign in various parts of the country to oppose abortion.