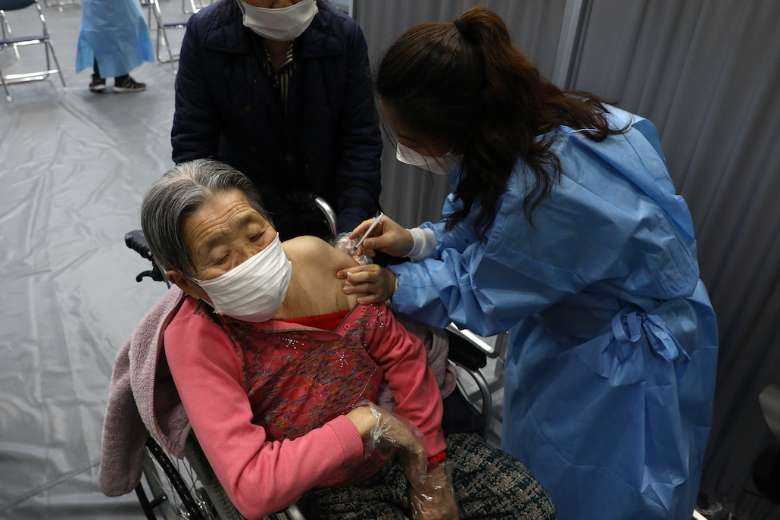 An elderly woman receives a Covid-19 vaccine in Seoul on April 1. South Korea is grappling with a low fertility rate and increasing aged population. (Photo: AFP)

Seoul Archdiocese in South Korea has launched a fundraising campaign to renovate its social welfare facilities including care homes for the elderly amid concerns about the rising aged population and shabby centers to care for them.

Seoul Catholic Social Welfare Society is conducting a campaign through its social networking service and website that will continue until Dec. 1, reports Catholic Times of Korea.

The welfare society is an umbrella organization serving various vulnerable groups including orphans, the disabled, single-parent families, women and elderly people in some 27 facilities in Seoul Archdiocese.

Father Hwang Kyung-won, the organization’s chief executive, said the campaign seeks to improve the structural conditions and environment of social welfare centers, especially those catering to elderly people as they have become risky due to severe aging.

The priest said the organization in collaboration with Catholic Architects’ Association recently carried out a survey of20 social welfare facilities that were constructed over 30 years ago.

Most buildings were found to have structural and functional defects and need urgent repairs and renovation, but they faced a fund shortage, the priest said. Seoul Archdiocese runs these facilities with government subsidies.

As part of the fundraising campaign, they promote videos to a broad range of people and groups to encourage them to donate.

Father Cho Yong-cheol, the organization’s vice-president, said the church-run facilities for the aged have become “valuable shelters for underprivileged people. But as the conditions of the facilities deteriorated, improvements are badly needed."

“We ask for a lot of interest and prayers from believers so that residents can spend a warm day in a safe home,” he said.

For years, the Catholic Church in South Korea prioritized pastoral care to vulnerable social groups like the disabled and elderly .

In 1977, the Catholic Senior Academy was established at Gonghang-dong Church and approved by Seoul Archdiocese in February 1981.

It led to the setting up of dozens of similar senior academies across churches in South Korea with the aim to help elderly people better cope with aging and also to train them in leading others in church activities.

In 2011, Incheon Diocese started construction of Mary Stella Home to provide integrated pastoral care for Catholic elders above 60 and to focus on improving their quality of life.

The Church’s concerns for the rising number of senior Catholics reflect decades of demographic change in South Korea with its low birth rate and increasing elderly population.

Government census data released last December showed the country’s population had fallen for the first time in history and counted at 51 million. The population growth rate dropped from 1.49 percent in 2010 to 0.05 percent by 2019, Yonhap news agency of reported.

Some 24 percent of its population are 60 and above, listing South Korea among nations with a high number of elderly people.

South Korea’s demographic trends and consequent challenges are similar to that of neighboring Japan, which has one of the world’s lowest birth rates and a super-aging society.

South Korea is Asia’s fourth-largest economy and ranks seventh globally in the human development index, but the aging population could challenge its economic growth, analysts say.