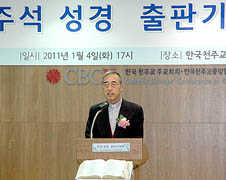 The Biblical Committee of the Korean Catholic bishops has published its first annotated Bible. The Catholic Bishops’ Conference of Korea (CBCK) officially launched the new Korean Bible with Annotations at the CBCK building in Seoul on Jan. 4. “Finally, the Korean Church has the Bible required by canon law,” said Father Thaddeus Lee Ki-rak, executive secretary of the CBCK. The bishop’s committee developed the annotated Bible by translating and adding to footnotes from the French version of ecumenical Bible, La Traduction Oecuménique de la Bible (TOB). Father Lee noted that the TOB is well recognized by Bible scholars and was jointly published by Catholic, Orthodox and Protestant scholars. The first copy of the annotated Bible was printed on Dec. 25, last year. “This annotated Bible provides detailed explanations which help the faithful to understand. It will help Korean faithful to live the word of God in the Church and society,” said CBCK President, Bishop Peter Kang U-il of Cheju. “Now, we have the full Bible in Korean. The annotated Bible will enrich our faith life,” added biblical committee president Abbot Simon Petro Ri Hyeong-u. The Korean Catholic Church previously published Seonggyeong, a Catholic translation of the Bible in 2005. Prior to that, the Korean Catholic Church used the Catholic-Protestant joint translation Bible. Following the publication of new Catholic Bible, the committee launched a project in 2006 to prepare the annotated Bible. Seven scholars worked on translating the introductions to each Gospel and preparing the footnotes. “We didn’t simply translate the TOB. We corrected some points and inserted related independent information. We also added information about various translations of the new Korean Bible,” Father Lee added. Related report Bishops Give Provisional Approval To New Catholic Bible KO12720.1635