Caritas Korea earmarks $113,000 for the neighboring countries reeling from the pandemic 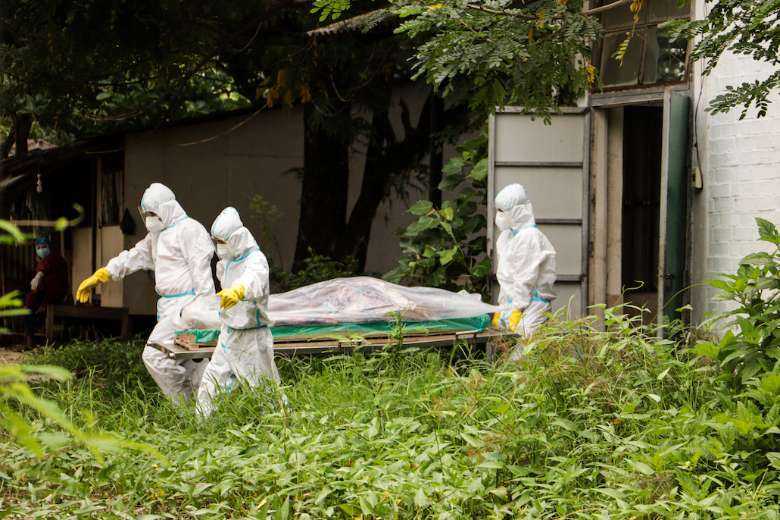 Volunteers wearing personal protective equipment carry the body of a Covid-19 victim for burial at Myoma Cemetery in Yangon on July 6 amid a surge in cases in Myanmar. (Photo: Anonymous source/AFP)

Korean Catholics have contributed donations for emergency relief for Myanmar and India, both reeling from the Covid-19 pandemic.

The money was raised by a program led by Bishop Benedictus Son Hee-song, auxiliary bishop of the Archdiocese of Seoul.

The funds allocated are 80 million won (nearly US$70,000) for India and 50 million won ($43,000) for Myanmar, which will be delivered to Caritas India and Caritas Myanmar through Caritas Korea, according to The Catholic Times of Korea.

The help from the South Korean Church comes as India is facing a dire situation as the Delta variant, which originated in India, takes its toll. More than 520 priests and nuns died of Covid-19 in India from April to mid-June.

In Myanmar, people are facing a humanitarian crisis after fighting erupted in ethnic areas between the military and civil resistance groups following the coup five months ago.

In Kayah state, a Catholic stronghold in eastern Myanmar, funds from South Korea will provide essential medicines and equipment to medical teams, nursing assistants and volunteers from Karuna Clinic and St. Raphael Clinic in Loikaw, the state capital.

The Southeast Asian has also seen Covid-19 cases surging on a daily basis along with a rising death toll, bringing total infections to 171,976 and deaths to 3,513.

The funds will be delivered through Caritas (Karuna) Myanmar, which has played a vital role in providing humanitarian assistance to thousands of displaced persons in Kayah, Chin and Kachin states — predominantly Christian areas.

Babo's Sharing allocates 150 million won each year to an emergency relief fund for domestic and foreign problems while Fool’s Sharing has supported emergency relief funds that provided assistance during the Pohang earthquake in 2017 and a forest fire in Gangwon in 2019, according to The Catholic Times of Korea.

Last month, Seoul Archiocese raised $1 million in donations in response to the Vatican’s appeal for a global vaccine-sharing program, especially for poor countries.

Cardinal Andrew Yeom Soo-jung of Seoul, who expressed solidarity with the people of Myanmar, also promised an emergency fund of $50,000 for Myanmar in March.

The Korean Church’s gesture comes as the country also battles a fourth wave of the pandemic fueled by the highly contagious Delta variant after finding 1,200 new cases on July 7, the highest number since December when it reported 1,250 cases.

According to the latest data, South Korea has reported 162,753 cases and 2,033 deaths from the contagion.