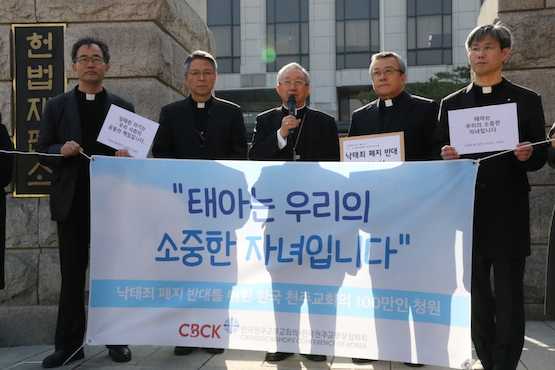 The Korean Church has appealed to the Constitutional Court to prevent abortion from being legalized by presenting a petition opposing such a move that included over 1 million signatures.

The Catholic Bishops' Conference of Korea (CBCK) lodged the petition on March 22 as the court was preparing to consider whether abortions should be decriminalized.

This is the first time a local Catholic church has filed a petition with the court. The signatures were collected from December 2017 through January 2018.

"The right to life can't be put to a majority vote," said Archbishop Hyginus Kim Hee-joong of Kwangju, who also serves as president of the CBCK.

"Decriminalizing abortion would mislead people into thinking it's okay," he said.

"But the church strongly objects to the killing of an innocent life. That cannot be justified under any circumstances regardless of cause," he added.

Now the church is asking the Constitutional Court to reject any pro-abortion law when it reviews the matter on April 24.

Korea's criminal law criminalizes abortion with just a few exceptions, such when pregnancy results from rape or endangers the mother's life.

The same court defended the anti-abortion law in 2012.

"Pregnant women's self-determination should not overrule the fetus' right to life," it ruled.