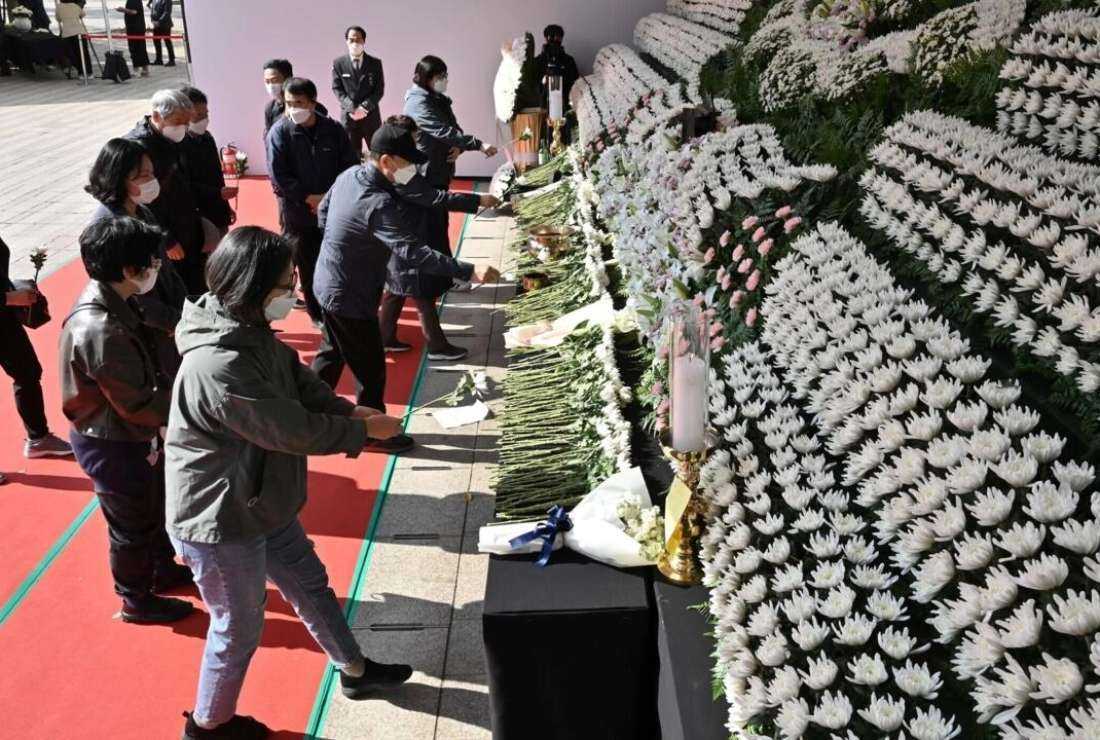 Mourners pay tribute in front of a joint memorial altar for victims of the deadly Halloween crowd surge in Seoul. (Photo: Jung Yeon-je/AFP)

Catholic bishops in South Korea have expressed deep sorrow and offered prayers over the death of 154 people in a stampede during Halloween celebrations in Seoul, amidst public criticism of authorities of lax crowd control.

The tragedy occurred in Itaewon, Seoul on Oct. 29, when around 100,000 people -- mostly in their teens and 20s, wearing Halloween costumes -- had poured into its narrow, winding streets for partying.

“We entrust to God's mercy the victims who unfortunately lost their lives in the tragedy that took place in Itaewon, Seoul on Saturday, October 29, 2022,” the Catholic Bishops Conference of Korea (CBCK) said in a statement.

“In addition, we offer our deepest condolences to the bereaved families, and we also pray for the speedy recovery and peace of the wounded,” said the statement.

The bishops termed the tragedy a result of “the cycle of injustice and irresponsibility” that has become a common practice in this society, which all must strive to break.

“To do this, we must first be faithful to our respective roles,” they said.

The bishops have offered “deepest condolences to the bereaved families,” and called for a detailed investigation to identify the root cause of the incident.

“For the peace and safety of the people, the relevant authorities must thoroughly examine the cause and process of this tragedy, and ensure that irresponsibility and oblivion are not repeated,” the statement

Archbishop Peter Chung Soon-taek Chung of Seoul also expressed his condolences and prayed for the victims and their family members.

The prelate in his message expressed his “sincere condolences to all the victims who lost their lives in this tragedy.”

He also prayed for the “authorities involved in the accident and all those who are working on rescue operations at the scene.”

The prelate expressed hope that “such a tragedy will not be repeated anymore.”

The Halloween tragedy sparked nationwide public shock and anger in a country hitherto well known for its crowd management.

"I am devastated by what happened, they were just trying to have a good time," 19-year-old student Hwang Gyu-hyeon told AFP on Oct.31, weeping, and struggling to speak clearly, as she explained how the deaths of so many people her age had affected her.

"I pray for the victims. I can't believe this accident happened despite the signs that were clear beforehand. Nothing was done to prepare for this crowd," she said.

Meanwhile, widespread criticism of the government’s failure in crowd control spread across the nation on social media platforms.

"I think the cause of the disaster was crowd control," a Twitter user wrote.

On Sunday, the government defended its policing plan of deploying only 137 officers at the venue.

"(The crush) was not a problem that could be solved by deploying police or firefighters in advance," Interior Minister Lee Sang-min told a briefing, reported AFP.

Most of the 154 dead, including 26 foreigners have been identified, while concerns remain that the death toll could rise further with at least 33 people in critical condition, officials said.

President Yoon Suk-yeol visited the location of the tragedy on Sunday and declared a week of national mourning until Nov. 5. Entertainment events and concerts have been canceled and flags nationwide are flying at half-mast.

Itaewon is famous for its nightlife and restaurants, and many Korean youngsters and foreign nationals visit the district for partying.

The Halloween party was the first to be organized after the nation lifted its Covid-19 pandemic restrictions and allowed public gatherings without masks.