Korean Church calls upon Japan to atone over 'comfort women' 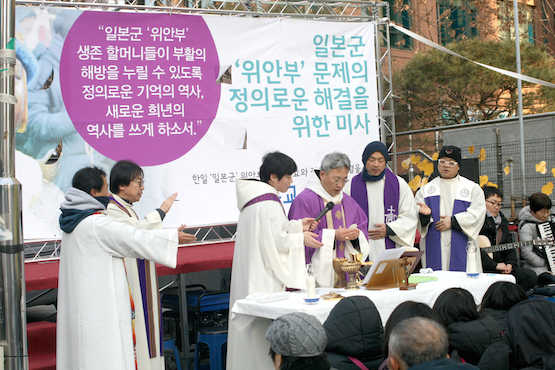 Abbot Blasio Park Hyun-dong of St. Benedict Waegwan Abbey, centre, celebrates a Mass asking for the just settlement of the comfort women issue in front of the Japanese embassy in Seoul on March 1. (Photo by Catholic Times of Korea)

A coalition of Catholic institutions in South Korea has called on the Japanese government apologize for forcing "comfort women" from Asia to provide sexual services for its troops during World War II.

Unlike Germany, Japan has never committed itself to making amends for alleged war crimes against its Asian neighbors, a constant source of torment for countries like South Korea that fell under its colonial rule.

The National Catholic Action for Nullity of Korea-Japan Comfort Women Agreement and Just and Evangelical Settlement conducted a Mass in front of the Japanese embassy in downtown Seoul on March 1 and asked Tokyo to settle the matter in a just and fair manner.

March 1 marked the 99th anniversary of what in Korea is known as Samiljeol, or the March First Independence Movement Day, one of the earliest displays of Korean resistance to Japanese rule.

The name derives from the initial outbreak of resistance on the first day of the third month of the year 1919 ("sam-il" means "3-1" in Korean). Protesters sit next to the statue of a teenage girl symbolizing former "comfort women", who served as sex slaves for Japanese soldiers during World War II, during a weekly anti-Japan rally near the Japanese embassy in Seoul on Jan. 10. On that day, South Korean President Moon Jae-in called for a "heartfelt apology" from Japan to the victims of wartime sex slavery, condemning a 2015 agreement as a "wrongful" solution. (Photo by Jung Yeon-je/AFP)

The Mass was presided over by Abbot Blasio Park Hyun-dong of St. Benedict Waegwan Abbey and other priests including Father Paul Moon Kyu-hyun, a social activist, and Jesuit Father Nakai Jun of Japan.

"Today is the day to recall the unsolved problems during Japanese colonial rule. We should look into the comfort women issue fairly," said Abbot Blasio Park, who also serves as the Apostolic Administrator of Tokwon in North Korea.

The prelate criticized Tokyo for continuously denying it ran a wartime policy of recruiting or enslaving comfort women despite evidence and testimony to the contrary.

"The Korea-Japan Comfort Women Agreement should be nullified because it was formulated in disregard to the views of victims," he said, referring to a deal reached in December 2015 that offered some compensation but no apology.

At the end of his trip to South Korea in November 2014, Pope Francis met with seven comfort women at Myeongdong Cathedral in Seoul before attending a Mass calling for inter-Korean reconciliation.

The women, many of whom are Catholic, staged weekly demonstrations in front of the Japanese embassy for years but few are alive today.

The coalition is made up of diocesan justice and peace committees, religious institutions and Catholic NGOs. It has vowed to press its demands by offering Masses every May 2 and Aug. 14, a day named in tribute to the comfort women in South Korea.