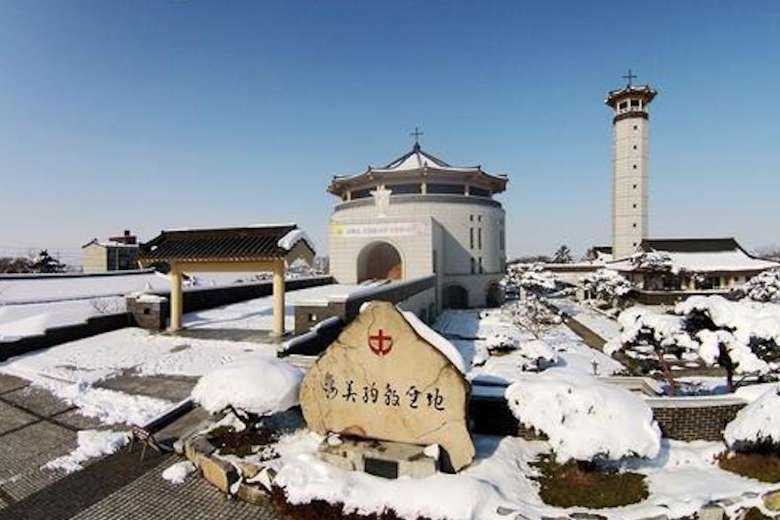 Officials in a South Korean city have joined Church leaders to celebrate the Vatican's recognition of a Catholic martyrs’ shrine as an international pilgrimage site.

Political leaders, civil officials and Church leaders together attended the program at the Haemi Catholic Martyrs’ shrine in Seosan city in South Chungcheong province, about 280 kilometers south of the capital Seoul, reports Catholic Times of Korea.

During the mid-December program, Auxiliary Bishop Augustinus Jong-soo Kim of Daejeon handed over the decree from the Vatican’s Pontifical Council for Promoting the New Evangelization to the shrine’s rector Father Han Gwang-seok.

The Haemi shrine beholds the legacy of the martyrdom of about 2,000 mostly unnamed Korean Catholics during early days of Catholicism in Korea. Thousands of Catholics were imprisoned, tortured and massacred when the Joseon dynasty unleased brutal persecution against Christians in the 19th century.

The church erected a 16-meter memorial tower to honor hundreds of unknown martyrs. The church has been able to record baptismal names of only 132 Catholics, who embraced martyrdom at Haemi.

In his speech during the ceremony, Bishop Kim said that people need to learn the history of Christian martyrdom during the Joseon dynasty to understand the history of religion, faith and social realities of the age.

“We need to be very clear about the history of martyrdom in the late Joseon dynasty period to realize that noble and slaves lived as families and created a new social order with inspiration from religion and faith,” Bishop Kim said.

The prelate added that the pilgrimage route will be developed and preserved as the Vatican has recognized the shrine as an international pilgrimage site.

“I hope it will become a place where people can find spiritual solace apart from being overburdened with material abundance,” Bishop Kim said.

The faith began to spread as an indigenous lay movement in the Buddhist-majority nation, triggering ire and persecution from staunchly Buddhist Korean rulers, who viewed Catholicism as a subversive faith that denied Confucian ethics and invited Western imperialism.

Thousands of Catholics were murdered for refusing to renounce their faith in the 18th and 19th centuries. In 1866, the largest persecution produced some 8,000 martyrs.

About 56 percent of an estimated 58 million South Koreans have no religion, 20 percent are Protestant, 8 percent are Catholic and 15.5 percent are Buddhist, according to official records.

There are about 5.6 million Catholics in three archdioceses, 14 dioceses, and a military ordinariate in South Korea.