Some 4,000 members of Shincheonji Church who recovered from the coronavirus are willing to donate blood plasma People walk below a display on a building showing messages of support for health workers and the country amid the Covid-19 pandemic outside Seoul station on July 8. (Photo: Ed Jones/AFP)

A Christian sect blamed for spreading Covid-19 infections in South Korea’s Daegu city plans to donate US$83 billion worth of plasma to help treat those affected by the coronavirus.

The Shincheonji Church of Jesus said some 4,000 of its members who recovered from the coronavirus are willing to donate blood plasma.

The amount of blood will be worth about $83 billion if all of the recovered cases donate 500ml individually, the sect said.

The offer comes as global agencies such as the Red Cross seek blood donations from people who have fully recovered from Covid-19, saying they have antibodies in their plasma that can attack the virus.

This convalescent plasma is being evaluated as a treatment for patients with severe or immediately life-threatening Covid-19 infection, the Red Cross said on its website.

“As Jesus sacrificed himself with his blood for life, we hope that the blood of people can bring positive effects to overcoming the current situation,” said Lee.

Authorities held the Christian sect responsible for spreading the contagion in early February after hundreds of initial infections were reported from people who attended its prayer programs.

A 61-year-old sect member reportedly spread the virus among members. She ignored symptoms of the infection and attended crowded prayer programs several times before testing positive on Feb. 10.

“The massive donation from the recovered patients in the Shincheonji Church will solve the problem of the lack of blood for research,” said an official from Green Cross Pharma, a biopharmaceutical company in South Korea. 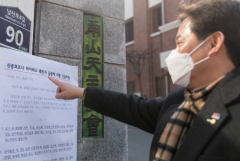 The Christian sect discussed its plan to donate plasma with the health authorities. Some recovered members have already donated individually and expressed their willingness to contribute to society, the note said.

Authorities in South Korea recently brought lawsuits against the sect alleging that it did not cooperate with authorities in containing the infection by not submitting the full list of church facilities and members.

Critics accuse Shincheonji of being secretive and claim that its hidden activities helped the virus go undetected. The fringe Christian sect is said to have branches in Wuhan, the Chinese city where the virus was first detected in December.

The sect denied the allegations and quoted vice-minister of health and welfare Kim Kang-lip as saying that “no evidence has been found that Shincheonji supplied missing or altered lists. And there were only minor differences.”

Shincheonji said the list of South Korean members was provided six days after it was requested, adding that the sect will cooperate fully with government investigations.

* The title of this story was edited on July 14.