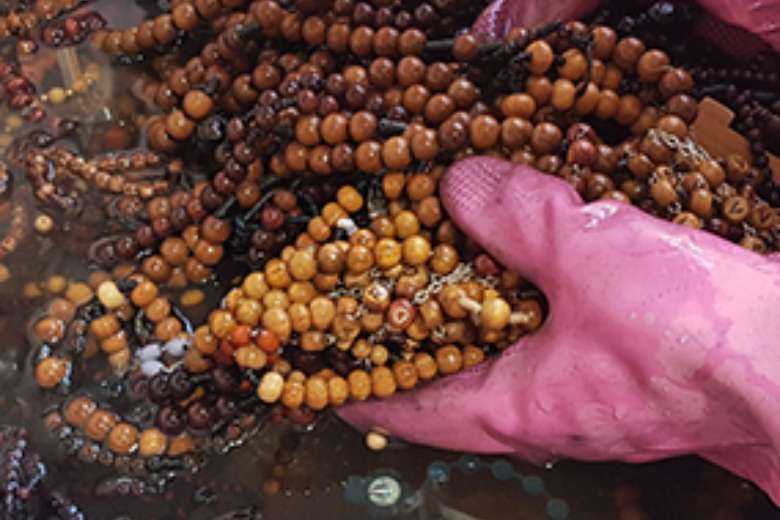 It has been more than 18 months since Catholics in Sanbon-dong Parish in Suwon Diocese started weaving rosaries from new materials and recycled old rosaries to adorn the hands of the faithful in faraway places from Africa to Latin America.

During October, the month of Mary, Our Lady of Holy Rosary, the 35 members have been even busier.

The Rosary Consecration Association of the parish has been producing rosaries to sell online and send to overseas missions to encourage Catholic faithful and their neighbors to pray and have Christ-centered lives.

Members send rosaries to priests in overseas missions and offer them as free gifts to children, including those who receive Holy Communion for the first time, according to association president Father Cho Nam-gu, reports Catholic Times of Korea.

New rosaries are sold in the market and funds are sent to support overseas missions, he said.

The association kicked off in February 2020 following a discussion between Catholics who wanted to promote rosary prayers but also sought to support overseas missions.

The idea sparked from the 25th anniversary of the church dedicated to the Blessed Virgin Mary of the Rosary last year. As part of the jubilee program, the parish decided to launch a campaign to make 10 million rosaries for overseas missions.

The voluntary group started with 35 members who purchased materials and collected old rosaries that were no longer used. Despite restrictions due to the Covid-19 pandemic, members used their spare time to make rosaries.

During the day, they devote their time and energy to cleaning, sorting and trimming old beads of rosaries and preparing beautiful new ones. The beads are arranged according to their color and shape. It takes two to three hours on average to make one rosary.

Rosaries sent to foreign missions are made from new materials and tailored to the culture and preferences of each country and local communities. For example, Latin America culturally prefers red.

Sister Kim In-suk, a nun from Sisters of Our Lady of Perpetual Help who leads the rosary group, believes the efforts to make rosaries also encourage people to pray the rosary. “Our members offer prayers together that those who will receive the rosaries become the driving force behind leading rosary prayers. The Blessed Mother takes care of us and we feel proud to honor her heart as we are able to deliver rosaries for overseas missions,” Sister Kim said.

Dominica Lee Hye-wok, who served as the first president of the group, recalled that at the beginning the members didn’t know how to make rosaries. She met with Sister Mok Young-kyung of the Sisters of Our Lady of Perpetual Help in Cheongju every week to learn the craft and then train members.

“Everyone is proficient in making rosaries now,” Lee said, adding that she still serves as a trainer for new members of the group.

“The association has not only made discarded rosaries useful but also ensured less plastic is printed. It contributes to saving the earth,” Lee explained.

The proceeds from selling rosaries and donations are saved for overseas missions. This year about 3,659,000 won (US$3,059) has been collected and sent abroad.

The parish wants to expand its rosary ministry, said Father Cho, head of the group. “It is a missionary activity that our believers have accomplished despite the difficulties during the pandemic,” he said.

This article uses material translated from a report published by Catholic Times of Korea on Oct. 10.