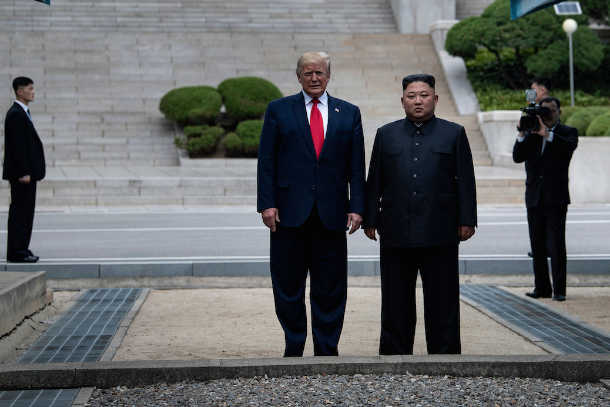 The Korean Catholic Church has welcomed the latest leaders' summit between the U.S. and North Korea as an important step towards achieving denuclearization and a lasting peace.

U.S. President Donald Trump and North Korean leader Kim Jong-un held a summit on June 30 at the so-called truce village of Panmunjom, which is a symbol of the divided Koreas.

Trump became the first sitting U.S. president to cross the border as Panmunjom lies just on the North Korean side.

Archbishop Hyginus Kim Hee-joong of Kwangju, president of the Catholic Bishops' Conference of Korea, released a statement supporting the development.

He said the new summit, four months after one held in Vietnam that failed to reach an agreement, provided a path for dialogue on permanent denuclearization.

Further, the archbishop expressed a wish that the leaders would have open hearts in order to speed up "reconciliation and unity of the Korean people".

Presiding over an Angelus devotion with pilgrims gathered at St. Peter's Square in Vatican City,  the pope hailed the summit as a good example of cultural of engagement.

"Such a significant gesture might constitute a further step along the path of peace, not only on the peninsula but for the whole world," Pope Francis said.

Taegon Andrew Paik Jang-hyeon, researcher at the Catholic Northeast Asia Peace Institute in South Korea, said the spectacle of the leaders of the U.S. and the two Koreas together at Panmunjom was the highlight of the summit.

This was because it showed that South Korea could have a more important future role in mediating the peace process.

Involvement of South Korea was vital for the U.S. and North Korea to understand each other, the researcher added.