About 10,000 Catholics were martyred for their faith during the Joseon dynasty in Korea 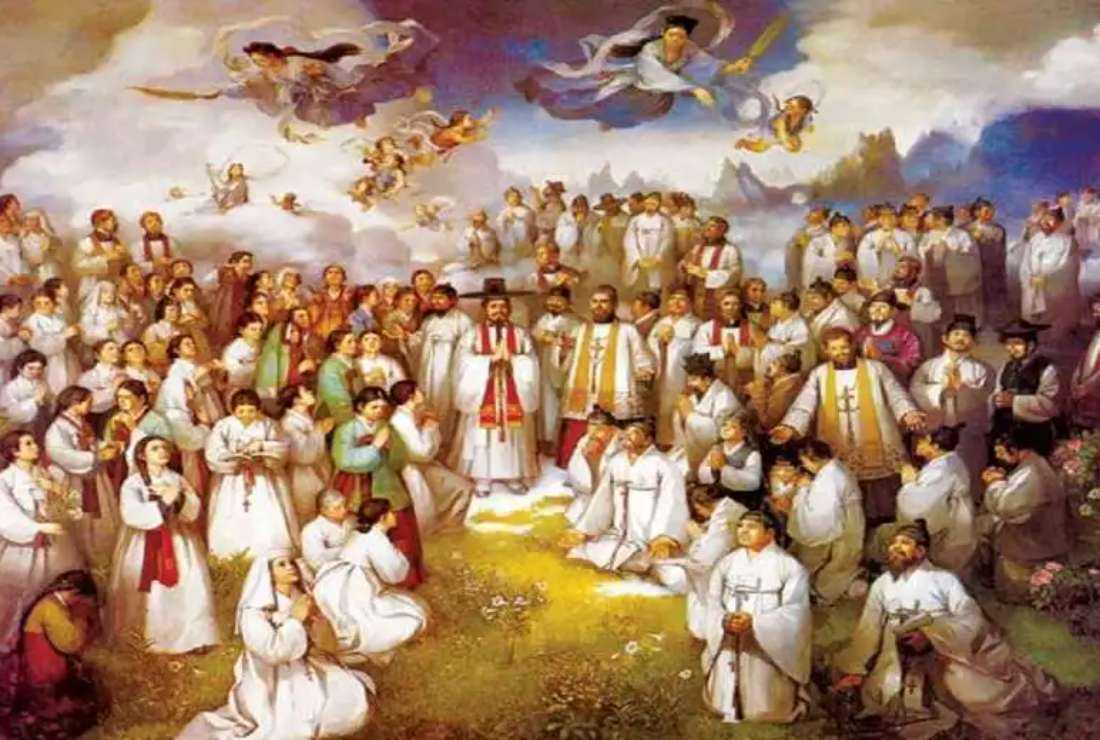 A painting of Korean Catholic martyrs killed for their faith during the late 19th century. (Photo: Research Foundation of Korean Church History)

Hundreds of South Korean Catholics have visited a major Catholic shrine to pay tribute to 19th-century martyrs who sacrificed their lives for their faith.

Archbishop Cho urged the faithful to draw inspiration from the martyrs and become good witnesses for the love for God, according to a report on the archdiocesan website.

“For the martyrs of Hanti, it must have been the most important thing to love God. That is why, while living in this barren mountain valley to escape persecution, they sacrificed their lives,” the prelate said in his homily.

He said the faithful should remember that they were the “descendants” of the Hanti martyrs and that they must follow in the footsteps of their ancestors and become “people of the Hanti Martyrs Village.”

Hanti village in Gyeongsangbuk-do province in the eastern part of South Korea has a significant place in the history of Catholicism in the country. It contains the graves of 37 martyrs killed during the Mujin Persecution of 1868.

"Between 1866 and 1886, about 9,000 Catholics, half of the total Catholic population of Korea at the time, were brutally murdered"

Church records say the family members of Catholics who were killed and imprisoned by the Buddhist rulers of the Joseon dynasty settled in Hanti village, located in a mountain valley some 600 meters above sea level.

Archbishop Cho insisted local Catholics take good care of the shrine and enliven the thoughts of the sacrifices of early Catholics.

“The Hanti martyrs’ shrine is the perfect holy place where our ancestors lived their faith, died, and were buried. We must take good care of this holy place so that those who visit it can receive the grace of faith abundantly,” the prelate said.

The Mujin Persecution was an extension of the bloody Byeongin Persecution that began in 1866 and nearly decimated Catholicism in Korea.

Between 1866 and 1886, about 9,000 Catholics, half of the total Catholic population of Korea at the time, were brutally murdered during the Byeongin Persecution. The martyrs included nine of the 12 French Catholic missionaries serving in the country at that time.

"Over the past century, Christianity has experienced exponential growth in Korea"

The persecution against Christians in Korea began in 1791 as the Buddhist rulers perceived Christianity as an alien faith when compared to Buddhism strongly influenced by Confucianism. An estimated 10,000 Korean Catholics were killed for their faith in various bouts of persecution that lasted about 100 years

It is believed that Christianity came to Korea during the Japanese invasion in 1592 when some Koreans were baptized, probably by Christian Japanese soldiers. It then started as an indigenous lay movement.

Saint Andrew Kim Taegon (1821-1846), the first Korean-born Catholic priest is the most famous among the martyrs in Korea. Father Andrew was beheaded in 1846 at the age of 25.

Over the past century, Christianity has experienced exponential growth in Korea, from about 1 percent in the 1900s to nearly one-third of the population today.

About 56 percent of South Koreans have no religion, about 30 percent are Christians and 15.5 percent are Buddhist, according to official government records.

Protestant Christians make up the majority and the Catholic Church's 5.6 million members are spread across three archdioceses, 14 dioceses and a military ordinariate.