Elderly people are a very precious resource and a deep breath that the Church and the world need, says Cardinal Yeom A prize-winning poster from an art contest organized by Seoul Archdiocese to mark the World Day for Grandparents and the Elderly on July 25. (Photo: Archdiocese of Seoul)

Seoul Archdiocese of South Korea launched a range of creative activities including an essay and art competition, book publication and a TV show to mark the first World Day for Grandparents and the Elderly declared by Pope Francis.

Cardinal Andrew Yeom Soo-jung of Seoul celebrated a special Mass at Myeongdong Cathedral on July 25. No faithful were allowed to attend the service due to the toughest Level 4 social distancing rules.

The Mass was broadcast live from Seoul Archdiocese’s YouTube channel.

During his homily, Cardinal Yeom urged the faithful to remember and recall the meaning of the establishment of the World Day while emphasizing the importance of young and old coming together in a covenantal sharing of life.

The prelate noted that the theme of the day — "I am with you always" (Matt. 28:20) — expresses the closeness of the Lord and the Church to every older person, especially in these challenging times of the Covid-19 pandemic.

“Pope Francis has spoken about the prayer of the elderly. Elderly people are our very precious resource and a deep breath that the Church and the world need. Let us come along with together in prayer. Let us build the world in fraternity,” Cardinal Yeom said.

Seoul Archdiocese has also prioritized building “the culture of love” by fostering inter-generational solidarity, according to an official press release.

As part of the plan, the Faith Life Writing and Art Contest was organized where 169 Catholics including 30 children participated. Cardinal Yeom announced the winner of the prizes on YouTube but the prize-giving ceremony was postponed due to Covid-19.

Meanwhile, the senior ministry team of the Pastoral Secretariat in Seoul Archdiocese has published a new book titled The story of Jesus told by Grandmother and Grandfather. The book was distributed to 232 Catholic parishes across the country.

The book emphasizes the role of grandparents and elderly people in sharing their faith by introducing Jesus and delivering his message to their grandchildren. 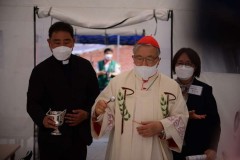 The ministry team and the Catholic Peace Broadcasting Corporation have launched a new TV show called Catholic Youth Again. The show aims to offer spiritual care to elderly viewers and to provide an opportunity to forge close bonds with each other through online interactions on the archdiocese's YouTube channel.

Pope Francis announced the World Day for Grandparents and Elderly during his Sunday Angelus address on Jan. 31. The pope said the day will be celebrated every year on the fourth Sunday of July to coincide with the feast of Saints Joachim and Anne, Jesus' grandparents.