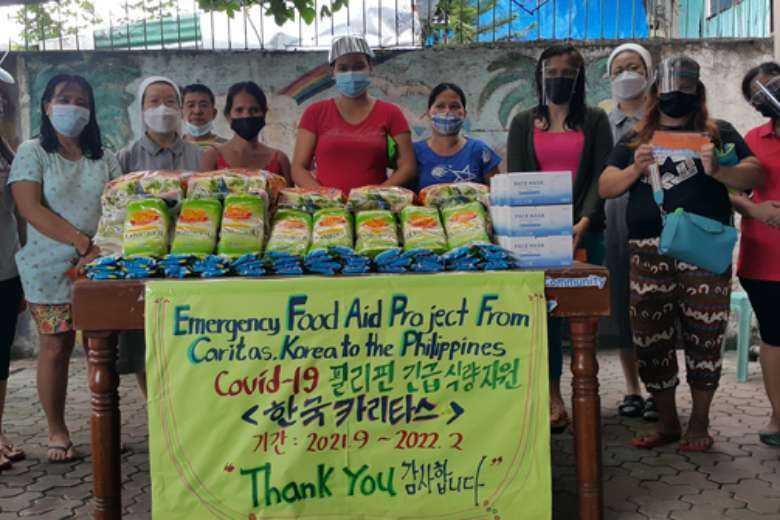 A group of Filipino people are seen at an emergency food distribution point during the Covid-19 pandemic supported by Caritas Korea. (Photo: Caritas Korea)

Catholics in South Korea have donated more generously to send overseas aid to poorer nations in the world despite difficulties due to the Covid-19 pandemic.

In 2021, Caritas Korea International, the overseas development cooperation agency of the Korean Church, raised about 4.07 billion won (US$3.5 million) for overseas aid projects by collecting donations from the faithful and sponsors.

The aid figure was the highest in five years and an increase of 1.4 billion won from the previous year.

A significant portion of the donations came from Catholics in South Korea's 1,750 Catholic parishes raised during Overseas Aid Week in January.

The donations were delivered for 72 aid projects in 35 countries around the world with 40 percent to emergency relief projects and 52 percent for development cooperation projects.

Recognizing that we are a global community sailing on the same boat, humanity is one family, we are all brothers

Caritas Korea noted that the expansion of aid was largely due to the suffering of countries. As the pandemic prolonged, emergency response programs such as food and medical support greatly expanded.

In his pastoral letter for Overseas Aid Sunday, Bishop John Baptist Jung Shin-chul of Incheon, president of Caritas Korea, stressed on love and fraternity for the global community.

“Recognizing that we are a global community sailing on the same boat, humanity is one family, we are all brothers. We have to walk together with hope and love,” Bishop Jung said.

“We need to look back on whether we have listened to their cry and tried to respond.”

Founded in 1975 as the human development committee of the Catholic Bishops’ Conference of Korea (CBCK), Caritas Korea became a member of Caritas Internationalis, the global confederation of Caritas and Catholic charities, in 1979.

Until the mid-1980s, Caritas Korea used to receive aid from other countries to support the Church’s social development projects. In 1993, bishops decided to transform the agency into an institution to offer aid to other countries.

In 2010, Caritas Korea was restructured to develop and strengthen its institutional capacity and was registered as Caritas Korea International under the foreign ministry.

Since then, Caritas Korea has supported more than 1,000 emergency relief and community development projects in response to humanitarian crises such as famine, natural disasters, communicable disease outbreaks and conflicts for both immediate relief and long-term recovery. These included large-scale disasters such as the conflict in Syria, Boko Haram insurgency, Rohingya refugee crisis, Venezuelan economic insecurity, Southeast Asia floods and human atrocities in Asia, Africa and the Middle East.

In collaboration with Caritas Internationalis, Caritas Korea has also been playing a leading role to support community development in North Korea since 2006.