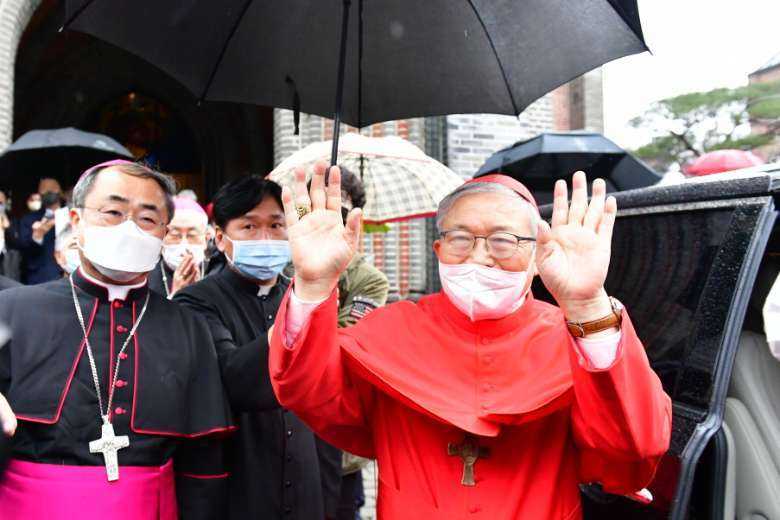 Catholic bishops, clergy and laypeople expressed their gratitude to Cardinal Andrew Yeom Soo-jung, the retired archbishop of Seoul Archdiocese, with a thanksgiving ceremony on Nov. 30.

Cardinal Yeom, who led the archdiocese since 2012, celebrated a thanksgiving Mass with Korean bishops at Myeongdong Cathedral in Seoul on the Feast of St. Andrew the Apostle, his patron saint, according to a press release from Seoul Archdiocese.

The prelate expressed his heartfelt gratitude to God and the faithful for their continued support that made his service as archbishop of Seoul and apostolic administrator of Pyongyang “a joyful journey guided by the Holy Spirit.”

“I would like to first and foremost thank God for giving me the opportunity and guidance to experience profound joy and comfort amidst challenges in these blessed years. It seems like only yesterday that I was installed as the archbishop of Seoul to succeed the late Cardinal Nicholas Cheong, who had asked me to become an honest and sincere pastor,” Cardinal Yeom said in his homily.

Cardinal Yeom said he confesses his “own deficiency” in carrying out his goals that included missionary work in Asia, youth ministry and reconciliation on the Korean Peninsula.

He also prayed and made good wishes for Archbishop-elect Peter Chung Soon-taek, whom Pope Francis appointed to succeed him on Oct. 28.

“As the Archdiocese of Seoul now plays a leading role not only in Asia but also in the Catholic Church around the world, I believe that the new archbishop will become a spiritual leader for the nation as a whole. I will always be grateful for every single moment and pray for peace on the Korean Peninsula and our Church. Please continue to keep me in your prayers,” he said.

“On the Feast of St. Andrew the Apostle, we are gathered in this cathedral to thank God who has faithfully guided Cardinal Yeom during his 10 years of ministry as the archbishop of Seoul. I am pleased to convey this blessing of Pope Francis to Cardinal Yeom and to the new Archbishop Chung as well as the entire Catholic community that we are all grateful to God for giving us Cardinal Yeom, the Good Shepherd, and wish Your Eminence good health and serenity,” said Archbishop Xuereb.

Born on Dec. 5, 1943, in Ansong, Gyeonggi province, into a Catholic family of five generations, Andrew Yeom graduated from the University of Seoul in 1970 and was ordained a priest on Dec. 8 of the same year in Seoul.

He taught at Songsin High School in Seoul and then became a chancellor of Catholic University of Korea Songsin Theological Campus (1987-92) and chancellor of the Archdiocesan Curia (1992-98).

On Dec. 1, 2001, he was appointed auxiliary bishop of the Archdiocese of Seoul and his episcopal ordination took place on Jan. 25, 2002.

He succeeded the late Cardinal Cheong on May 10, 2012 and served as the archbishop of Seoul and apostolic administrator of Pyongyang, which covers the whole of North Korea.

Pope Francis elevated him to the rank of cardinal on Feb. 22, 2014. Cardinal Yeom served as the chairman of the Episcopal Commission for Clergy of the Korean Catholic Bishops from Oct. 13, 2016. He is also a member of the Vatican’s Congregation for the Evangelization of Peoples and Congregation for the Clergy.

Cardinal Yeom has been hailed for ministries and charities for the poor and homeless, supporting mission territories as far away as Africa and constant efforts for peace and reconciliation on the Korean Peninsula.

He tendered his resignation to Pope Francis in 2018 after reaching the mandatory retirement age of 75. However, the pope extended his term for two years.

His successor, Archbishop-elect Peter Chung, will be installed as the new head of Seoul Archdiocese on Dec. 8.