Christian groups have been mobilized after presidential office received 200,000 signatures calling for decriminalization Cardinal Andrew Yeom Soo-jung, archbishop of Seoul, speaking on the church's teachings on the sanctity of life at the National Assembly on Nov. 10. Catholic groups are fighting a campaign against the decriminalizing of abortion. (photo Catholic Times of Korea)

Catholic groups in South Korea are mobilizing people to keep the country's anti-abortion law, in the face of a growing campaign to abolish it.

More than 230,000 people have petitioned for the decriminalization of abortion via the presidential homepage, the Korea Times reported. After the number of signatures surpassed 200,000 on Oct. 29, the South Korean government was required by law to make an official statement on the issue.

Seoul Archdiocese's Committee for Life held emergency meetings on Nov. 7 and 13 to discuss an effective action plan. Following the meetings, the committee decided to launch a counter-petition and also strengthen Christians' awareness of the abortion issue. It plans to gather signatures against the decriminalization of abortion at parish level.

As part of their campaign to keep abortion illegal, they have also seconded the help of religious institutions and societies.

The Catholic Lay Apostolic Council of Korea has sent letters to some 80 Catholic lawmakers outlining the church’s teaching on abortion. It also stated its own position on the petition demanding decriminalization, which it says is being driven by women's groups and NGOs.

Father Simon Jee Young-hyun, secretary-general of the Life Committee, said, "Korean society is in crisis in defending life more than ever. The abortion dispute is about the value of a life, which is the starting point of defending all human life." 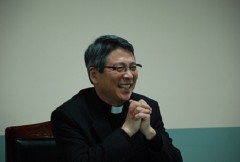