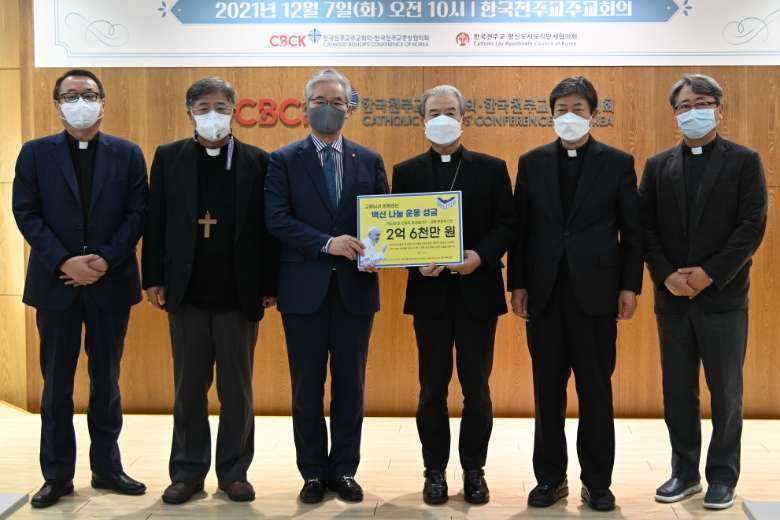 In the latest effort, the Catholic Lay Apostolate Council of Korea, Catholic Peace Broadcasting Corporation (CPBC) and the Catholic Times of Korea donated funds equivalent to US$300,000 during a ceremony organized by the Catholic Bishops’ Conference of Korea (CBCK) in capital Seoul on Dec. 7.

The money will be sent to the Vatican through the CBCK, according to a press release from Seoul Archdiocese.

The three organizations established a task force for the campaign, aiming to raise awareness among the faithful and all South Korean citizens to ensure equitable, timely and universal access to Covid-19 vaccines for every country in the world.

The task force ran a telephone fundraising campaign while making a theme song and a music video, which can be found on CPBC’s YouTube channel.

We are living through difficult times caused by the Covid-19 pandemic. The social and economic crisis remains severe, especially for those who live in poverty

The initiative came as the Korean bishops launched the vaccine-sharing campaign at its general assembly from March 8-12.

Cardinal Andrew Yeom Soo-jung, the retired archbishop of Seoul, earlier made an appeal to Catholics to open their hearts to express their solidarity with the poor.

“We are living through difficult times caused by the Covid-19 pandemic. The social and economic crisis remains severe, especially for those who live in poverty. It is the weak and the poor suffering the most when a crisis hits. Therefore, I would like to turn this crisis into an opportunity to show our solidarity with parishes, organizations, congregations around the world and lend a helping hand to those in need,” Cardinal Yeom said.

So far, the Catholic Church in Korea has sent the Vatican more than $5 million raised by 16 dioceses for the vaccine-sharing campaign. It will donate another $6 million by the end of the year.

Pope Francis expressed his gratitude to Cardinal Yeom and Korean Catholics by sending letters in July and October.

“I very much appreciate this gesture of charity and generosity, thanks to which many suffering people will receive aid. I embrace you and your archdiocese, granting my affection and my spiritual closeness,” the pope wrote.