Han Jin-seop's portfolio includes a series of sculptures of altars, pulpits and statues in Korean churches 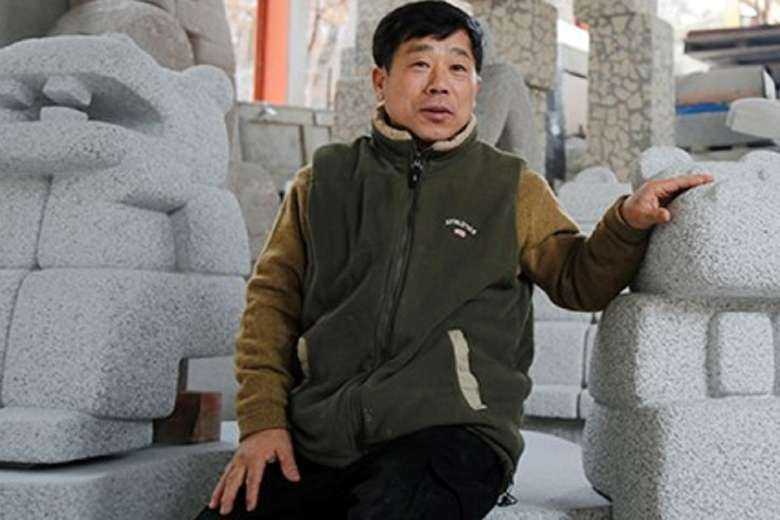 Now, the 64-year-old Catholic, whose Christian name is Joseph, is working tirelessly to produce sculptures for a public park under his name that will open in May.

“I hope everyone, rich or poor, will come to see my work. They can approach, touch, climb or sit next to them, and even take pictures,” Han said.

The sculptor has been working for months at Han Jin-seop Sculpture Park being created at Iljasan Neighborhood Park in Dunchon-dong district of South Korean capital Seoul.

Featuring 50 of his works, the park, sponsored by Gangdong-gu Office in Seoul, is popular with locals who visit regularly to enjoy its natural beauty. The officials intend to make the park a symbolic melting pot of harmony for nature and sculptures.

Once completed, it will be the number one sculpture park in Korea created by a single sculptor.

The park draws inspiration from the Vigeland Park in Oslo, Norway, which is a popular tourist attraction. Vigeland Park features 200 sculptures by Norwegian sculptor Gustav Vigeland (1869-1943).

Han Jin-seop is a leading Asian modern and contemporary sculptor who pioneered transforming Korea’s tradition of direct stone carving into refined abstraction. His works have been influenced by Constantin Brancusi (1876-1957), a Romanian sculptor, painter and photographer considered a pioneer of modernism and one of the most influential artists of the 20th century.

Han’s new sculpture project is the latest highlight of the illustrious life of the Catholic master artist in Buddhist-majority South Korea.

Born in 1956, Han Jin-seop graduated from the College of Art of Hongik University in Seoul. He started his career as an art teacher but quit the job to devote himself to his artwork. He moved to Italy and graduated from Carrara National Academy of Fine Arts in Sculpture in 1985.

He returned to Korea in 1990 and took up sculpting as a profession and passion.

Recalling his days in Italy, Han says that he keenly observed the artworks and lives of master artists and thought how he could give them a life in Korean art forms to make them unique.

At first he envisions a work as a mental image, and then he starts breaking stones mostly using a saw and hammer to give them shape.

“I love stone sculptures and I have made sculptures my life. Still I have many ideas to pursue in my life,” he says.

Han mostly sculpts figures outdoors and explains how his works differ from those of studio artists.

“Sculpting is hard work and time-consuming but this is my favorite passion. A studio artist goes to work in a set environment and leaves soon after the regular work is done. I go to work in early morning and return home at night, no matter if it is summer or winter,” the sculptor said.

Despite Western influences, Han has carefully refrained from duplicating Western art but explored modernism in Korean culture and traditions.

In 2016, Han’s works were displayed at the famous Maison Gerard Gallery in New York.

Han’s portfolio includes a series of sculptures of altars, pulpits and statues in Korean churches. These include Daehwa Cathedral in Pyeongchang in Wonju, Seongnam Bundang Castle in Suwon, Nonhyeon Cathedral in Seoul, Hongje Cathedral and Ssangyong Cathedral in Cheonan in Daejeon.

A sculpture of the Holy Family at Bundang Catholic Church in Suwon Diocese is one of the most notable church artworks of Han. The sculpture, installed in 2009, features St. Joseph with open arms in a gesture of protecting the happy Holy Family.

Other notable works feature in two churches in Pyeongchang county, Gangwon-do. In 1997, Han carved several sculptures including a cross-shaped statue, pulpit and a statue of Our Lady.

Han says the Catholic Church needs to promote the work of good artists to help the faithful pray in a beautiful and holy atmosphere.

“More people need to come across artworks including church art and the Church needs to discover and encourage good artists. Maybe this way we can enrich ourselves personally and culturally,” he says.