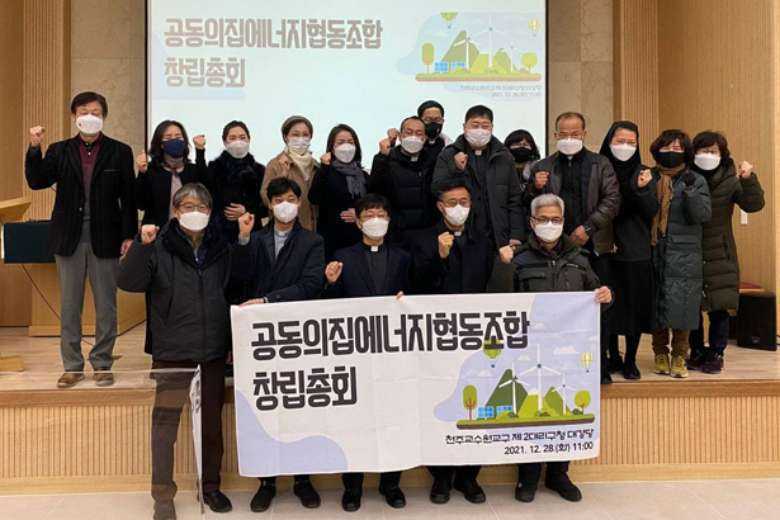 A Catholic group in Suwon Diocese in South Korea has undertaken a series of resolutions to promote eco-friendly projects, renewable energy and carbon neutrality in parishes, religious communities and organizations.

The Common Home Energy Cooperative held its first general meeting in Anam-dong neighborhood in Suwon on Dec. 28 and elected new leaders who announced a host of plans to respond to the ecological crisis with inspiration from Pope Francis’ environmental encyclical, Laudato Si’, reports Catholic Times of Korea.

Suwon Diocese established the forum, under the auspices of the diocesan ecology and environment committee, last September as part of the Korean Church’s 7-Year Laudato Si' Journey, a collective action plan that aims to care for creation in the spirit of integrated ecology that aims for a sustainable world.

Father Stephen Yang Ki-suk, head of the committee, has been elected the first president of the forum.

He said the forum will engage in programs to help society become carbon-neutral and energy-efficient and to promote consciousness and lifestyles among believers based on “ecological spirituality.”

“Pope Francis is requesting that churches and believers actively respond to the global ecological crisis by participating in the Laudato Si’ 7-Year Journey. We ask for many people to join us in a cooperative that groups have joined forces to create,” Father Yang said.

The forum, the priest said, will inspire citizens to reduce energy consumption and become producers of eco-friendly, renewable and sustainable energy.

Carbon neutrality gained momentum after the 2015 Paris Climate Agreement. The UN Intergovernmental Panel on Climate Change announced that the world must achieve carbon neutrality by 2050 to limit global warming of 1.5 degrees Celsius above pre-industrial levels.

Father Yang said the forum aims for the diocese to achieve 100 percent self-reliance on eco-friendly energy and carbon-neutrality in parish communities and seeks to produce and sell renewable energy directly in the future.

The first eco-friendly power plant will be launched in March with funding from members and donations.

The forum will recruit more members by making regular visits to parish communities to explain its activities and to encourage people to join the forum.

To implement the Laudato Si' action plan, Korean dioceses are running regular campaigns to raise ecological awareness and transform public perceptions about the environment based on a range of themes relating to sustainable management of transport, energy, water, trees, garbage and soil.