The thermal power plant would damage the environment in Samcheok city famed for its pristine sandy beach, activists say 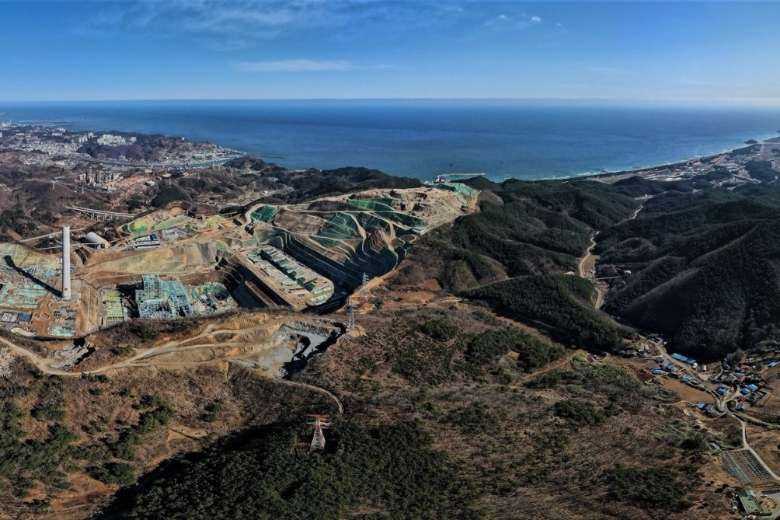 An aerial view of the 2.1-gigawatt coal power plant being constructed at Samcheok city in Gangwon province of South Korea. (Photo: www.forourclimate.org)

A Catholic climate group in South Korea has organized a second demonstration to oppose and demand closure of an under-construction power plant in a beach city famed for its cultural, educational and tourism sectors.

A delegation from Catholic Climate Action of Korea joined by members of Justice, Peace and Integrity of Creation (JPIC) held the second march against the coal-powered plant in Samcheok city in Gangwon province from Nov. 28-29 with the theme “Reviving Sick Samcheok.”

Catholic Times of Korea reported that the groups held their first demonstration against Samcheok Blue Power Plant on Oct. 3-4 when activists met with local environmental groups, participated in a pilgrimage for life and peace, held a protest rally in front of Samcheok City Hall and arranged a Mass.

This time the activists met with activists, participated in a pilgrimage walk from Samcheok City Hall to Samcheok Post office and held a Life and Peace Mass on the first day.

The next day, they visited Maengbang Beach, which is under threat due to potential damage to the ecosystem from the emissions of the power plant.

Maengbang is a popular sandy beach stretching over 1.2 kilometers which attracts about 500,000 holidaymakers each year thanks to its pine tree forest, clean white sand, shallow waters and convenient amenities, according to koreatriptips.com.

Father Kang Su-seung from Catholic Climate Action said there is no option but to work together to shut the power plant to save the city and beach from environmental degradation.

“Only if the construction of the coal-fired power plant is halted can we save the disappearing beach and protect Samcheok. We can only solve this by working together,” Father Kang said.

The priest said the group will carry out a third demonstration to oppose the plant on Christmas Eve and Christmas Day.

The 2.1-gigawatt plant is being constructed at a cost of US$4.3 billion, according to the Korea Herald. It is expected to be completed by April 2024.

The project has also drawn investment from POSCO Group, one of the world’s largest steel manufacturing companies and a leading conglomerate in South Korea.

Various environmental groups such as Solutions for Our Climate have called on the government to carry out an audit on state-run banks including Korea Development Bank and the Industrial Bank of Korea for bankrolling the project. The two banks are among the seven major financers of the project that the group is targeting.

Activists say the funding scheme is a betrayal of taxpayers in South Korea where public sentiment against coal power forced a number of companies to disssociate themselves from coal power projects.

"There is no pretext for the coal power project to continue, either financial or environmental-wise," Park Jee-hye, director of the group, reportedly said.

The power plant project also angered K-pop fans, prompting a fans' group, K-Pop for Planet, to launch a campaign in September to collect signatures from all over the world demanding a halt to the project.