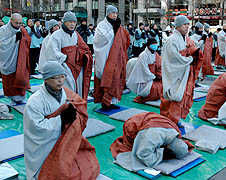 Korea’s largest Buddhist denomination has staged a “1080 bow” protest against an alleged religious bias by the government. On Jan. 10, some 230 Buddhist monks and lay staff from the Jogye Order bowed 1080 times in a three hour protest at Cheonggye Plaza in Seoul. “The government, which must be fair to everyone, is dominated by specific groups or powers based on a specific religion and educational background, and it carries out its purpose by pushing ahead with its power,” the group said in a statement issued prior to the protest. The group criticized the ruling Grand National Party for rushing the 2011 budget through parliament. The budget included cuts to social welfare while increasing allocations for the government’s controversial Four Rivers Project. The budget also reduced the allocation for a temple stay program by 7 billion won ($US 6.2 million) causing anger in Buddhist circles. “The passing of the budget with the power of the majority shocked us as a regression of democracy,” the group said. Kim Young-il, assistant deputy director of the Jogye Order Department of Planning and Coordination told ucanews.com that the 1080 bows reflected repentance for past faults. “In Buddhism, ’108 bows’ is an ordinary way of praying and training,” Kim explained. “1,080 bows has a wider meaning signifying repentance for 10 Buddhist misdeeds with 108-bows for each misdeed. “It also signifies a protest against the government which is continually discriminating against Buddhism,” he added. The order is planning worship ceremonies at 3,000 temples on Jan. 11 to denounce the government’s actions. Local Buddhist groups have continued to protest against the government’s alleged bias against Buddhism and in favor of Protestantism since President Lee Myung-bak, a Protestant, assumed office in 2008. Related report Korean Buddhists intensify protests KO12774.1636 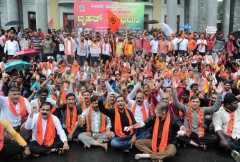