Catholic bishops in South Korea have reiterated an appeal to the government to abolish the death penalty constitutionally.

The subcommittee for abolition of the death penalty under the Justice and Peace Commission of the Catholic Bishops’ Conference of Korea has sent a letter of appeal to the Constitutional Court signed by all incumbent bishops.

The call to abolish the death penalty is rooted in the Church’s strong and long-standing stance on the sanctity and dignity of all life, said Father Hyundai-il, head of the national correction and pastoral committee of Seoul Archdiocese.

"All life in this land is dignified. The death penalty deprives human life in the name of the law and is directly contrary to church teachings," he said.

The priest pointed out that the Universal Declaration of Human Rights stipulates that the death penalty is an inhuman punishment that violates the right to life, and that the death penalty should be abolished in all countries around the world as the UN adopted the Second Optional Protocol of the International Covenant on Civil and Political Rights for Abolition.

“All countries that have joined the European Union have abolished the death penalty, and Korea is also at the point of legal abolition. Our society needs to make more efforts to prevent violent crime, but extreme punishment cannot be an alternative,” the priest noted. “Rather, the abolition of the death penalty will be a great opportunity to break the vicious circle of violence.”

South Korea carried out its last executions in 1997 when it hanged 23 people convicted of murder.

In 1998, President Kim Dae-jung enacted a moratorium on executions that existed until 2012.

However, one death sentence was handed out in 2018 in South Korea and 61 individuals remain on death row, according to Parliamentarians for Global Action (PGA), a New York-based group advocating human rights, the rule of law and democracy.

A bill to abolish the death penalty was placed in South Korea’s parliament 2015 but it failed to pass. While South Korea ratified the International Covenant on Civil and Political Rights in 1990, it has yet to ratify the Second Optional Protocol aiming at the abolition of the death penalty, the PGA noted. 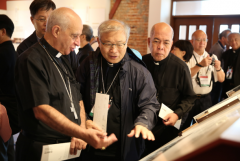 The European Union and Amnesty International have written letters to the South Korean Constitutional Court in support of the abolition of the death penalty.

A 2018 survey by the National Human Rights Commission of Korea found that 80 percent of respondents were supportive of the death penalty, but 70 percent opted for repealing it for an alternative punishment.

The current administration of the country's third Catholic President Moon Jae-in has been deliberating whether the execution moratorium should be upheld or be suspended.

On Nov. 17, South Korea voted for the first time in favor of a United Nations resolution calling for the abolition of the death penalty. The country’s National Assembly is expected to debate the issue.

"The question of whether to abolish the death penalty is a serious issue that has to do with the foundations of the state's punitive powers, so we will study it carefully based on an overall analysis of the death penalty's role in criminal policy, public opinion and domestic and overseas situations," the Justice Ministry said.