Report looks at how proposed policies measure up against church teachings 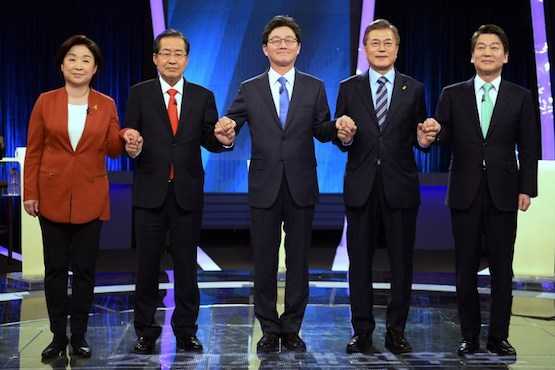 The Catholic Bishops' Conference of Korea has released a report on how the policies of potential presidents stack up against church teachings.

To prepare the report, released April 18, the bishops' Committees for Justice and Peace, Bioethics, Ecology and Environment and the Reconciliation of the Korean People sent letters to five leading candidates asking their position on various issues based on the Catholic teachings.

Bishop Lazzaro You Heung-sik of Daejeon, president of the bishops' Committee for Justice and Peace, said, "As this election follows the impeachment of the former president, Catholics need to choose suitable one based on their election pledges and pray for the new president to work according to his or her conviction."

Only Moon Jae-in of the Minjoo Party and Sim Sang-jung of the Justice Party, both Catholics, replied, so the bishops consulted the National Election Committee on the election pledges of other candidates to also compare them with church teachings.

"The presidential election should be decided by the people based on policies. However, it's a pity that three of the leading candidates did not reply to our enquiries," said the bishop.

Except for the abortion issue, the election pledges of Moon and Sim were found to be faithful to Catholicism. Moon, a liberal human rights lawyer, did not show a clear position on the legalization of abortion saying, "It needs a wide-ranging social consultation" while Sim argued for a watering down of abortion laws.

The elections will be held on May 9 where it is likely that Moon, 64, will be elected to succeed ousted president Park Geun-hye.

Park was removed from office as part of the fallout from an influence-peddling scandal, which saw thousands take to the streets in protests, supported by churchmen and many Catholics, to demand her removal.

Almost 11 percent of South Korea's population of 50 million is Catholic.