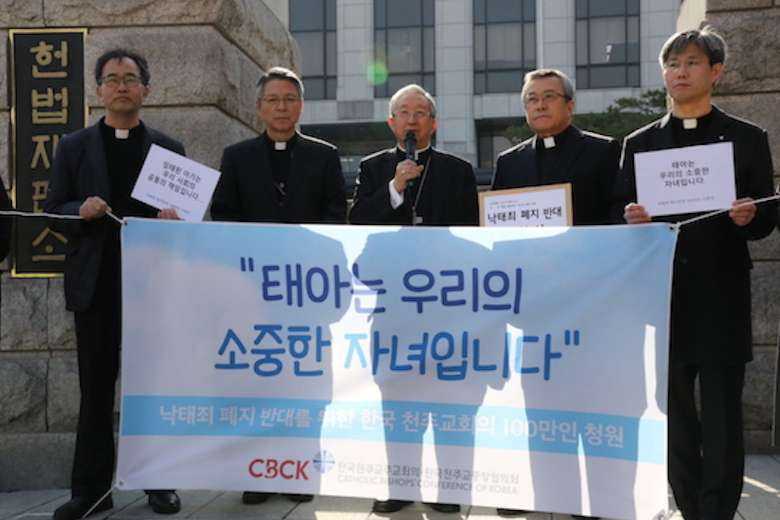 Archbishop Hyginus Kim Hee-joong of Kwangju, president of the Catholic Bishops' Conference of Korea, speaks at a press conference on March 22, 2018, in front of the Constitutional Court of Korea. The bishops presented a petition to oppose legalized abortion. (Photo: Catholic Times)

A South Korean bishop has urged the country's parliament to formulate legislation that respects and protects life as the East Asian nation heads towards legalizing abortion.

Bishop John Baptist Moon Hee-jong, chairman of the bioethics committee of the Catholic Bishops’ Conference of Korea (CBCK) and auxiliary bishop of Suwon Diocese, issued a statement as Catholic parishes observe May as the month of family and hold special Sunday Masses called “Life Sunday.”

The South Korean medical community is still undecided whether the life of the fetus or the health of the mother can be properly protected due to the lack of anti-abortion law, said Bishop Moon.

The prelate reaffirmed the Church's position on the “sacredness of human life” and that “women's right to self-determination cannot overlap the right to life of the fetus.”

“Human life begins from the moment of fertilization, so the degree of protection cannot be varied depending on the stage of pregnancy," Bishop Moon said.

"When it is legal to inflict death on unborn human life, it is a repressive decision on the weakest who are incapable of protecting human life."

Christians cannot obey laws that go against their conscience. They should not cooperate in acts contrary to God's law, even if national law allows

Bishop Moon urged the government and the parliament to ensure a safe environment where women can conceive and give birth with confidence and provide for various consultations on the risk of abortion and side effects. He added that all must have an opportunity to “recognize the right of conscientious objection to abortion” by pregnant women and doctors and to “improve society and the social system in the direction of respecting life.”

The prelate also made an appeal to Christian faithful to oppose laws that go against their conscience.

"Christians cannot obey laws that go against their conscience. They should not cooperate in acts contrary to God's law, even if national law allows,” he said. “All Christians must resist the threat to human dignity and life and proclaim the gospel of life to all people in the world through united prayer, life education, active publicity and participation.”

Bishop Moon's statement is the latest in a series of responses by the South Korean Church to attempts to legalize abortion.

On April 15, the CBCK's committee for life issued another strong statement opposing abortion and urged the government to formulate law to “protect the life of the unborn child.” It also announced a series of programs and activities to highlight the Church’s pro-life stance.

South Korea’s Mother and Child Health Act 1953 criminalized abortion. A woman could be punished by up to one year in prison or a fine of a maximum of 2 million won (US$1,740) for having an abortion, while a medical worker who carried out the procedure could be sentenced to two years in prison.

Women’s groups and rights campaigners have argued the law was against a woman’s right to choose what to do with her own body and alleged the abortion ban was part of a broader bias against women in the country.

Following prolonged debate, the Constitutional Court on April 11, 2019, ruled that criminalizing abortion was illegal and ordered the government to end the ban on abortion by 2020.

The top court delivered the verdict after a female doctor challenged her prosecution for performing almost 70 abortions.

An opinion poll in 2019 found about 58 percent of South Koreans favor abolishing the abortion ban, the BBC reported.

In October 2020, parliament announced that a bill would be drafted to decriminalize abortion in the first 14 weeks of pregnancy. Abortion for pregnancies resulting from rape would be permitted between the 15th and 24th weeks.

In January this year, parliament passed legislative measures to declare criminalization of abortion as unconstitutional and repeal the previous laws.