Korean artist crafts dolls to share the gift of life Jiwon Jung has been crafting beautiful dolls for more than two decades since she realized her life was a gift from God to serve the world.

“... I realized that my hands were not mine but were given to be used for the sake of the world. I'm trying to repay that favor, even a little bit, with the hands I've been holding for a while," Jung, 48, told the Catholic Times of Korea in a recent interview.

She is the chief executive of Dollatelier, a widely popular homemade doll store in Cheongdam-dong in South Korean capital Seoul.

Jung uses fibers, elaborately patterned fabrics, thread and needles to produce beautiful princesses in fancy clothes, gorgeous lace and elegant skirts. Everything from the doll’s body to the costumes and small props is handmade.

While Jung runs her business from her store in Seoul, she has regular sales from online orders in South Korea and beyond. Her beautiful dolls have brought her fame as Korean celebrities like actors Jang Dong-gun, Park Seong-woong, Shin Eun-jung, musician Kim So-hyun, American actress Chloe Moretz and many others have collected dolls, books related to dolls and doll clothes produced by Jung.

The artist is also known for her generosity to charitable purposes. She has donated dolls to Myeongdong Cathedral in Seoul that were showcased in an exhibition. The dolls sold out and fetched 4.68 million won (US$4,010). The proceeds were channeled to Bedania's House, a shelter for migrants and refugees in Seoul Archdiocese, and the Caritas Immigrant Cultural Center in Incheon Diocese.

Jung says that the teachings of Jesus inspire her to share her life with others this way.

“When a child who moved in doesn’t get along with his friends at the playground, someone says: 'I’ll fit you in too. Let's play together here, so we can hang out together.' I think Jesus led me to sharing like that,” she said.

Jung has a tight schedule for her daily life as she runs workshop operations, gives lectures and observes her duties as chairwoman of the Korea Handicrafts Association. 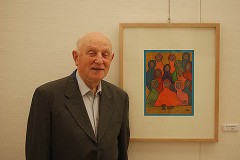 However, she is also involved in voluntary activities in the parish including a liturgical group and an English musical class for children. She also teaches handicrafts to pregnant mothers through a church group.

Jung says her strong faith encourages her to serve others no matter how busy she is.

“I was just doing what I had to do, but Jesus has led me to a precious experience in life. I am grateful and happy that the talent the Lord has given me is this talent. I want others to feel this happiness,” she said.

In recent times, Jung has been focusing more on training and giving lectures on dolls and doll clothes as people told her that listening to her lectures healed wounds in their hearts.

When we make dolls, with how much love and compassion will Jesus look at us?

Jung says she started making dolls to relieve the stress that piled up on her as she was doing a job, and this work brought her reward and happiness.

“I hope that it will help middle-aged housewives who sacrificed their young and pretty days for their children and families to find self-esteem and have a healthy mind,” she said.

As Jung continues her craft passionately, she is also driven by a spiritual awakening.

“When I make doll clothes, I do it in a trance with the thought, 'How pretty would it be if I wore this?' When we make dolls, with how much love and compassion will Jesus look at us?”