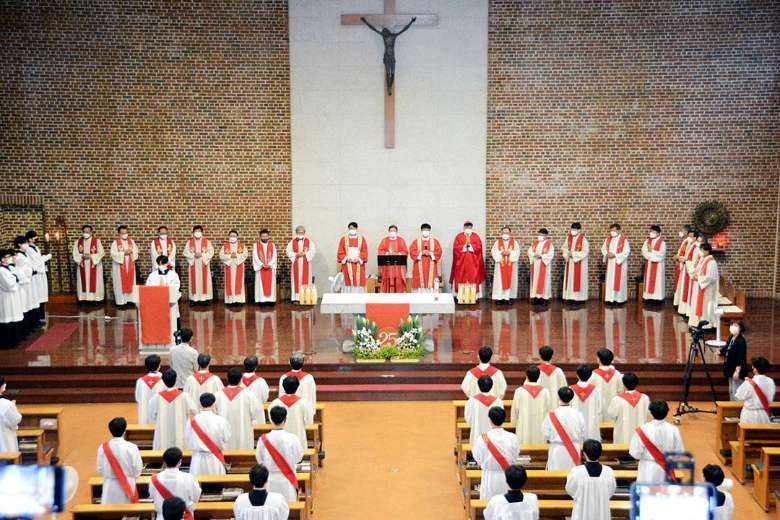 Archbishop Thaddeus Hwan-ki Cho of Daegu celebrates a Mass on June 1. The archdiocese is organizing a musical contest to revitalize church music and to offer hope to the faithful distressed by the pandemic. (Photo: Archdiocese of Daegu)

A Catholic archdiocese in South Korea will hold a musical contest with an aim to revitalize church music and to provide the faithful with an opportunity to reflect and practice pastoral priorities of the Church.

The Archdiocese of Daegu, which covers the third largest metropolitan area after capital Seoul and Busan, is launching the Creative Artist Contest that focuses on a 10-year pastoral plan recently adopted by the archdiocese.

The pastoral plan announced by Archbishop Thaddeus Hwan-ki Cho is based on the theme “Community living the joy of the Gospel together.”

Any faithful can participate in the contest and all have been asked to submit traditional church music and music on Catholic life with core values of the pastoral plan such as the Word of God, fellowship, liturgy, love of neighbors and missions.

In cases of church music, both single-voice and mixed choral songs with three or more voices that can be used in liturgy are acceptable, while music on Catholic life should be in single-voice form that anyone can sing easily.

The deadline for submissions is Sept. 30 and results of the contest screening will be announced in December. The prizes will be conferred during a grand ceremony next January.

As this is the first creative musical contest in the Church, we hope that many believers across the country will be interested and participate

Besides revitalizing church music, the contest aims to offer hope and comfort to the faithful distressed by the lengthy Covid-19 pandemic, said Father Oh Young-jae, who is in charge of church music in Daegu Archdiocese.

“I came up with the idea of ​​creating a community that shares hope and comforts with the hearts of believers exhausted from the prolonged Covid-19 while reflecting on the meaning of the Church’s 10-year long-term pastoral plan,” the priest was quoted as saying by the Catholic Times of Korea.

Father Choi Seong-Jun, head of the cultural and public relations bureau of the archdiocese and organizer of the contest, expressed hope that the event would attract the attention of many faithful from all over the country.

“As this is the first creative musical contest in the Church, we hope that many believers across the country will be interested and participate. We will make sure that the best songs are selected,” he said.

Daegu Archdiocese is the center of the Catholic Church on the southeastern Korean Peninsula. During the persecution period in the 19th century, Catholics including St. John Yi Yun-il were executed at Gwandeokjeong in Daegu. The archdiocese has about 492,000 Catholics.

Church officials say there about 5.6 million Catholics spread in three archdioceses, 14 dioceses and a military ordinariate of the country.