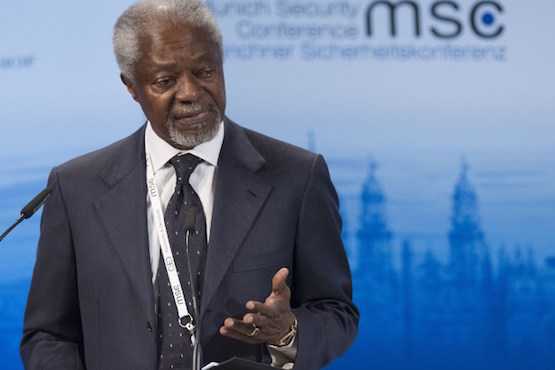 The establishment of a high-level commission led by former UN Secretary-General Kofi Annan is a welcome step in addressing the human rights situation in Myanmar's Rakhine state, say rights groups. (Photo by AFP)

Aung San Suu Kyi has moved to address the plight of stateless Rohingya Muslims in Rakhine state by appointing former UN Secretary-General Kofi Annan to head an advisory commission to look into the problem.

The establishment of the high-level commission shows that Myanmar's government is committed to "finding lasting solutions" to the complex and delicate issues in  Rakhine state, Suu Kyi's office said in a statement Aug. 23. The news was welcomed by activists and rights groups.

"[The] announcement is a sign that Myanmar's authorities are taking the situation in Rakhine state seriously. But it will only have been a worthwhile exercise if it paves the way for the realization of human rights for all people in the state," Rafendi Djamin, Amnesty International's Director for Southeast Asia and the Pacific, said in a statement on Aug 24.

The advisory commission includes nine independent members — three international and six from Myanmar — including members from ethnic Rakhine and Muslim communities. Kofi Annan, who shared the 2001 Nobel Peace Prize with his UN colleagues, is the most high profile appointment.

The commission's priorities include conflict prevention, humanitarian assistance, national reconciliation, human rights and development. Their first report will be submitted through the State Counselor and published within the year.

More than 120,000 Rohingya have been confined to squalid camps in apartheid-like conditions since violence erupted between local Buddhists and Rohingyas in 2012 that left scores dead. Since then they have been denied citizenship, freedom of movement, health care and education.

"The commission needs to listen to voices from [the] Rohingya communities," said Kyaw Hla Aung. "They must visit the areas of Maungdaw [and] Buthidaung where the majority of people are Rohingya so that they can learn the situation on the ground and the true history."

Daw Cho Cho, a Rohingya Muslim from an IDP camp in Myaebon Township, said that she heard about the new commission and it brought "much hope" to her community.

"Our hope is that we will get equal rights and access to health care, education and freedom of movement," said Daw Cho Cho. "We are looking forward to going home."

Myanmar Buddhists refer to the Rohingyas as "Bengalis," implying that they are illegal immigrants from neighboring Bangladesh despite the fact that vast numbers of them have lived in the country for decades.

Pe Than, a Lower House lawmaker from the Arakan National Party — a hardline Buddhist party in Rakhine — questioned the involvement of foreigners in a commission when there are so many experts already in Myanmar.

"We are concerned that Kofi Annan's leadership will emphasize human rights due to international pressure and therefore question how reliable and independent the report would be," Pe Than told ucanews.com.

He added that the National League for Democracy-led government has neglected to cooperate with Rakhine Buddhists and ignored the concerns of the majority population in the state. "We will monitor the commission's activities closely," he said.

U Furuk, a Rohingya Muslim from Dar Paing IDP camp near Sittwe, said that the situation in the camps has not improved despite the government taking office in April.

"We have stayed in the IDP camps for more than four years with restricted freedom of movement and have to rely on international aid," said U Furuk, who is a camp committee member. "The new commission will bring a light of hope … to a stateless people."