Father Michael McGivney, who was beatified on Oct. 31, is not a name familiar to most Asian Catholics. He is the founder of the Knights of Columbus, a society that has touched many lives in Asia.

When Blessed Michael McGivney founded the Knights of Columbus in the United States in the 19th century, his priority was to check Catholics deserting the Church to join secret societies, which were often anti-Catholic.

Born of Irish immigrant parents in 1852 in Waterbury, Connecticut, Blessed McGivney played a vital role in the dramatic growth of the Church in the US. Ordained in 1877, he ministered to a heavily immigrant community.

He found an antidote to the problem of Catholics leaving the faith: build a positive image for the Church by helping people in need. 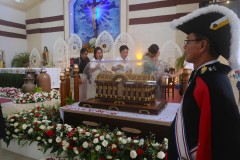