More than 2 million people have fled Ukraine since the Feb. 24 invasion of the Eastern European nation 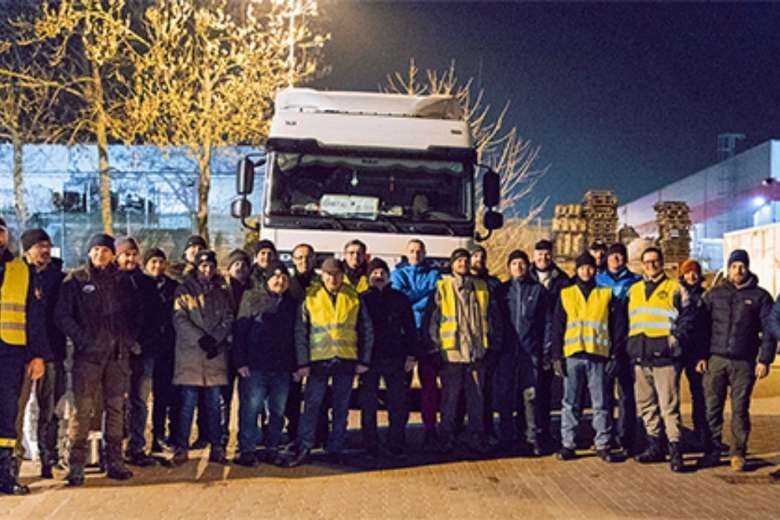 Knights of Columbus in Tomaszów Lubelski, Poland, gather in front of a truck filled with supplies bound for Ukraine on Feb. 28. (Photo: kofc.org)

The Knights of Columbus established a small presence in both Ukraine and Poland a few years ago, but now Knights councils in both countries have sprung into coordinated action with help for refugees since the Russian invasion of Ukraine began on Feb. 24.

The Ukraine Solidarity Fund, established by Supreme Knight Patrick Kelly, was launched Feb. 25. Intended to help with shelter, food, clothing and medical supplies, it has received more than $4.5 million to date in donations, with the first truckload of aid arriving March 1 in Lviv, a city of more than 700,000 near the Polish border.

"It's really providential," said Szymon Czyszek, a lawyer in Krakow, Poland, who heads the Knights' relief efforts there. "We want to overcome evil with good," he said in a March 8 Zoom call with news media.

So far, at least 1.2 million refugees have crossed into Poland, with the main crossing at the town of Medyka and more arriving at the train station at Przemysl.

As of March 9, the U.N. High Commissioner for Refugees estimated that between 2.1 million and 2.2 million people have now fled the Russian assault on Ukraine, the largest military invasion of a sovereign European nation since World War II. Also seeing refugee influxes are Britain, Germany, Hungary, Slovakia and Moldova.

"I think that everyone is preparing for a long-term process. I don't think it's going to change anytime soon"

Biden administration officials have indicated the Ukrainian refugees would be welcomed in the United States, but most have indicated a preference to stay in Europe. The U.S. Department of Homeland Security has announced it will grant Temporary Protective Status, or TPS, to Ukrainians already in the U.S. for 18 months, so they can remain in the country.

"It's not a risk-free activity," Czyszek acknowledged with regard to helping the refugees. But he added that the Knights' efforts have so far not been under a Russian siege as is occurring now along a designated humanitarian corridor near the city of Mariupol in southern Ukraine.

"I think that everyone is preparing for a long-term process. I don't think it's going to change anytime soon," he said.

The Knights are working in tandem with the Byzantine Catholic Church, but the humanitarian effort is "for any person in need," Czyszek emphasized. "We are there to build unity." Ukraine has an estimated 1.5 million Catholics.

The Polish branch of the Knights has been organizing supply collections in the cities of Krakow, Radom and Tomaszow Lubelski.

"We do whatever we can to provide shelter," Czyszek said, building a database of parishioner homes and parish centers that will host refugees. "We try to give them a sense of safety."

The Knights also have established "Mercy Huts" at border crossings to distribute food and water.