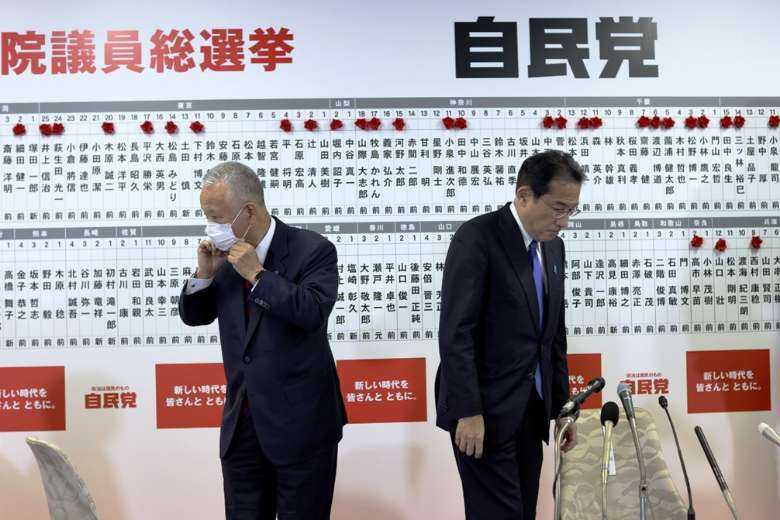 Fumio Kishida, the new prime minister of Japan who helped bring about the historic visit of US President Barack Obama to his constituency Hiroshima in 2016, had only one hope in the Oct. 31 general election — to lose as few seats as possible.

But Kishida's conservative Liberal Democratic Party (LDP) defied expectations by claiming 261 seats against the 276 it held in the last election in 2017. The LDP maintained its single-party majority in a big victory for Kishida, who took power only a month ago.

Kishida, a former banker who has struggled to shake off an image that he lacks charisma, is likely to be emboldened by the win.

He has adopted the traditional policies of the party's right wing, pushing to increase military spending while also promising to address wealth inequality.

The LDP's stable majority will enable it to pass legislation, including key budget proposals.

After being defeated last year in his run for the LDP leadership by former PM Yoshihide Suga, 64-year-old Kishida had been giving generous pledges to address income inequalities through an economic plan that the media renamed "new capitalism." But two years of the pandemic have left behind a battered economy.

The democracy of the nation is in crisis as the confidence of citizens in politics, which constitutes its pillar, is seriously eroded

Opposition parties argue that LDP policies, specifically “Abenomics,” have only served corporate profits and helped raise share prices of publicly traded companies without obtaining wage increases. All true, but it must be said that many middle-class families have a lot invested in the stock market.

Elected on Oct. 4, Kishida’s first assignment was to add substance for a party worn out in terms of consensus as a consequence of the repeated states of emergency during the pandemic that frustrated consumers and crippled small hotel entrepreneurs.

Just consider that at the beginning of this electoral campaign Kishida could count a support index of 40-43 percent while his predecessor was supported by about 70 percent of the citizens.

How bad the middle class is faring at this historical moment can be judged by the race between the ruling and the opposition parties in proposing a series of measures aimed at supporting the household economy, including subsidies for higher education and the establishment of a government body to address issues relating to children directly.

As regards national security, it should be emphasized that the LDP, for the first time from its political platform, announced its intent to spend at least 2 percent of GDP — a hundred billion dollars — to strengthen and modernize the army.

This defense budget target seems overwhelming given that in recent decades Japan's defense spending had stabilized at around 1 percent of GDP.

Yet from the viewpoint of the Japanese citizen, there is little difference between the ruling party and the opposition. The prime minister himself recently said: “The democracy of the nation is in crisis as the confidence of citizens in politics, which constitutes its pillar, is seriously eroded.”

The political parties are therefore left with no choice but to appeal to the voters to go to the polling booth and express their preference.

Yet there is one difference between the government and the opposition parties that stand out. The LDP opposes legislation that would ensure equality for sexual minorities and provide for separate surnames for married couples.

In contrast, the opposition and the communist party are adamantly following the liberal American agenda, from supporting homosexual marriages to free education for all without dwelling on the specifics like how it would be paid for.

But on the issue of women, both the ruling and opposition parties should share equal blame. Less than 20 percent of 1,000 parliamentary candidates are women despite a law enacted merely three years ago promoting equality between the two sexes during elections.