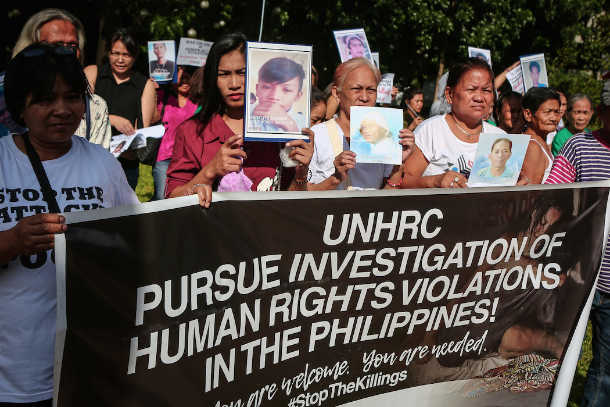 Families and friends of victims of drug-related killings in the Philippines hold a gathering in Manila on July 9. (Photo by Jire Carreon)

Families and friends of people killed in the Philippines' war on drugs have joined calls for the United Nations to push for an independent investigation into the country’s human rights situation.

"An independent probe is urgently needed," said Carmelite priest Gilbert Billena, who coordinates the group Rise Up for Life and Rights. The priest led a Mass in Manila on July 9 "to pray for a positive outcome" in deliberations for a proposed independent investigation by members of the U.N. Human Rights Council (UNHCR).Iceland earlier filed a draft resolution urging the U.N. body, which is meeting in Geneva this week, to call for concrete action against the rising number of killings in the Philippines.If approved, the UNHRC will request that rights chief Michelle Bachelet prepare a comprehensive report on the human rights situation in the Philippines that will be presented to the council."We need the help of international experts in responding to an ongoing human rights crisis in the Philippines," said Father Billena.Earlier this week, Amnesty International accused the administration of Philippine President Rodrigo Duterte of carrying out a "large-scale murdering enterprise" as a result of the war on drugs.In another report, the Armed Conflict Location & Event Data Project placed the Philippines as the fourth most dangerous place in the world for civilian-targeted violence, behind India, Syria and Yemen."We pray and hope that the 47 member states of the UNHRC will vote in favor of the resolution to establish an independent investigation," said Father Billena.He said that if the resolution is passed, "it will be a strong addition to the growing global voice of concern on the killings and for accountability."Lawyer Edre Olalia of the National Union of People's Lawyers said he was not optimistic there would be a positive outcome but said he remained hopeful.Church and human rights groups in the Philippines have expressed support for the Icelandic resolution tabled at the current 41st session of the UNHRC.They described it as "a big step in stride with other parallel measures and contemporaneous efforts that merit the full support of an intergovernmental body."The Philippine government has repeatedly denied allegations of human rights abuses related to the drug war, saying there have only been 6,000 drug-related deaths since 2016. "This is not a numbers game to be wagered over human lives," retorted the human rights groups that included the National Council of Churches in the Philippines and the Philippine Independent Church.They said the growing number of killings indicated what appeared to be a "shoot first, justify later" policy among the Philippine National Police, resulting in the "mad slaughter of poor Filipinos."The presidential palace, however, dismissed the allegations, saying international reports were factually wrong.