Villagers flee amid army claims of clashes with communist rebels 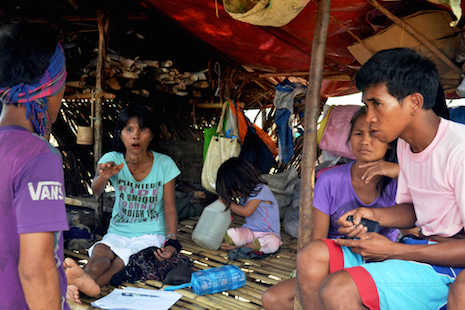 A Manobo family seeks shelter in a makeshift hut in an evacuation center in Surigao del Sur province. (Photo by Ben Serrano)

By Joe Torres in Manila and Ben Serrano in Butuan City

The killings of two tribal leaders in the southern Philippine province of Surigao del Sur have turned at least seven indigenous communities into virtual "ghost villages."

"What are left now in the communities are our farm animals and empty houses," said Necias Avila, a council member of the village of Diatagon in Lianga town.

"We are afraid that our homes are now being looted," Avila told ucanews.com.

Thousands of indigenous villagers fled their homes in fear Sept. 2, a day after the killings of two tribal leaders and a school director in the town of Lianga.

On Sept. 4, soldiers of the Army's 75th Infantry Battalion announced over local radio that government troops clashed with some 60 communist rebels in one of the villages the day before.

Gov. Johnny Pimentel of Surigao del Sur, however, said the alleged rebels "were creations of the military."

"[The military] created monsters. They are harassing communities they suspect of supporting communist rebels," Pimentel said in an interview.

The Rural Missionaries of the Philippines, an organization of Catholic missionaries working in remote villages, vowed to "fight on" after their literacy and numeracy schools also were attacked.

"Our teachers, our students and their parents, accused of being members of the [communist rebels], have been sprayed with bullets and imprisoned for baseless accusations," said Missionary Sisters of Mary Sister Maria Famita Somogod.

"What we need to do is to fortify ourselves and make a unified stand. We have to be strong to demand prosecution," she said.

The nun said the killings and attacks could have only been done by "someone bereft of his soul."

On Sept. 3, a 15-year-old Manobo boy from the village of Mendis, Pangantucan town, Bukidnon province, recounted to journalists how he witnessed the killing of his father, his two brothers and two relatives on Aug. 18.

The military and the police claimed that the incident was a "legitimate encounter" between government forces and the communist New People’s Army rebels.

The boy, however, said his father and siblings even begged the soldiers to take them in as prisoners instead of killing them.

"We do not simply call for the cessation of their heartless attacks. We seek, we act, for justice," said Somogod, adding that for several years "we have been targets of threats, harassment, of killings."

In Manila, various groups expressed indignation over the human rights abuses in tribal communities in Mindanao.

Student activists marched to the military's national headquarters in Quezon City to denounce the killing of school director Emerico Samarca and tribal leaders Dionel Campos and Aurelio Sinzo on Sept. 1.

"The people's lives are plagued with terrors and horrors by the regime’s fascist [anti-insurgency campaign]," said Charisse Banez of the League of Filipino Students.

Protesters pelted the gate of the military camp with paint bombs and spray-painted the word "berdugo (hangman)." Philippine student activists stage a protest rally at the gate of the military's national headquarters in Manila to protest human rights violations in tribal communities in Mindanao. (Photo courtesy of League of Filipino Students)

"The military's horrors spread like wildfire in the countryside. They occupied communities, burned schools, and killed activists and residents. Even children were not spared," said Banez.

The students demanded the immediate pull-out of the military in tribal communities and the disbandment of paramilitary groups.

Data from indigenous peoples group Katribu shows that since 2010, when President Benigno Aquino came to power, 68 tribal people have been victims of extrajudicial killings while one remained missing.

Of the 68 tribal people killed, 53 came from Mindanao.

There were also 99 cases of harassment reported and 176 tribal leaders and members of tribal organizations face "trumped-up charges."

The group also recorded nine incidents of bombing of communities and farmlands, and 54 cases of forced evacuations in Mindanao, displacing some 20,000 people.