Police killed seven members of a suspected Rohingya robber gang during a raid, triggering fresh concerns over the increasing vulnerability of refugees to crimes in Bangladeshi camps.

The shootout and deaths occurred in hilly areas of Jadimora in Teknaf of Cox’s Bazar district in the early hours of March 2, confirmed Lt. Mirza Shahed Mahtab, in charge of Teknaf camp for the Rapid Action Battalion (RAB), an elite police unit.

“We came to know that notorious Rohingya robber Jakir was hiding in Jadimora hills with his gang. As an operation team of RAB raided the area, the robbers fired at us and we fired in self-defense. Seven members of the robber gang were killed and we seized five guns and a large cache of ammunition from the hideout,” Mahtab told UCA News.

Another suspected Rohingya member was killed in a gunfight with Bangladesh Border Guards the same day, local media reported.

Cox’s Bazar has been sheltering about one million Rohingya Muslims from Rakhine state of Myanmar, most of whom fled deadly military crackdowns at home in 2016 and 2017. 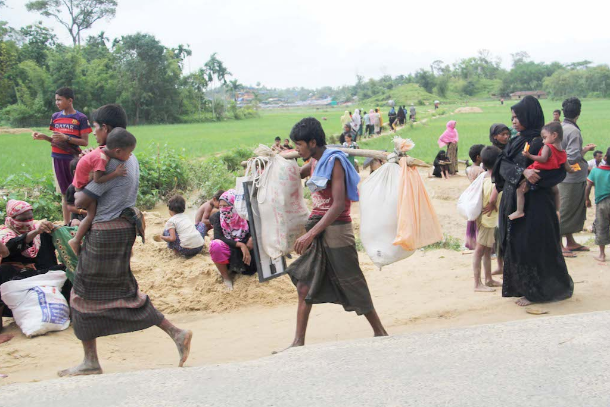 Local and international media have reported on Rohingya being preyed on by various criminal gangs including robbers, extremists, drug and human traffickers.

On several occasions, Rohingya refugees were killed in police shootouts alongside Bangladeshis for their involvement in crimes and militancy.

However, the March 2 shooting and deaths marked the highest number of deaths of suspected Rohingya criminals in police shootouts, triggering shock and concerns over the increasing risk of crimes at refugee camps in Cox’s Bazar.

“There is a massive concentration of people in a small area, which makes it difficult for law enforcers to monitor criminal activities. Moreover, Rohingya people have many similarities to the local community — physically and linguistically — making it more challenging. But we are aiming to curb crimes by any means,” Mahtab added.

Rohingya leaders say they are aware of Rohingya getting involved in criminal activities but the whole community does not take the responsibility.

“There are groups among Rohingya but I don’t know about any robber gang. Most Rohingya are happy and grateful to find shelter in Bangladesh. If any Rohingya get involved in crimes, it is up to the person and their families, and the community condemns them,” Muhammad Amin, a community leader from Kutupalong camp, the largest refugee shelter in Cox’s Bazar, told UCA News.

Amin fled to Bangladesh in 2017 from the Maungdaw area of Rakhine with his family. He is one of dozens of mazis (voluntary community leaders) who support government officials and lawmen to oversee the camps.

Rohingya involvement in crime in nothing new but has intensified in recent times, said James Gomes, regional director of Catholic charity Caritas Chittagong, one of the major charities operating among refugees in Cox’s Bazar.

“There were allegations of Rohingya being involved in crimes even before the 2017 mass exodus, and it has intensified since then, as this small area grapples with a large number of people. It is really difficult to monitor each refugee family and law enforcers are also disproportionately low. Nobody knows what happens in the camps at night,” Gomes, a Catholic, told UCA News.

In recent times, some Rohingya have been involved in robberies as they want to make quick money to pay traffickers to move abroad illegally, he pointed out.

“Rohingya refugees get free food, accommodation and medical services in the camps, but some of them are not happy with these facilities. They have high ambitions and they want to fulfill them in illegal ways,” he added.