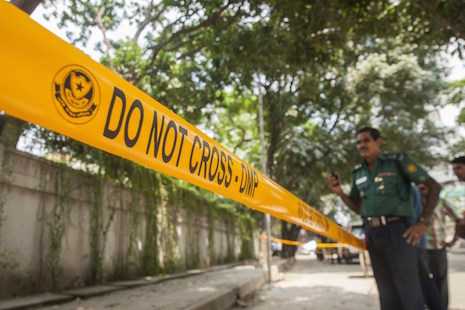 Bangladeshi police officers stand guard at the site where an Italian charity worker was shot to death by attackers in Dhaka on Sept. 29. (Photo by AFP)

The murder of an Italian aid worker in Dhaka has raised fresh fears about the rise of Islamic militancy in Muslim-majority Bangladesh.

Cesare Tavella, 50, was shot dead while jogging in Gulshan, a diplomatic area in Dhaka, on Monday evening.

Tavella was a technical director for the Bangladesh office of the Dutch charity, Interchurch Organization for Development Cooperation.

"He was shot three times by three assailants who used a motorbike to escape. We are not yet sure about their identities, but the murder seems preplanned," Mokhlesur Rahman, acting Inspector General of Police, told journalists.

The United States and United Kingdom have issued alerts to their citizens living in Bangladesh, warning of further militant attacks and urging them to remain vigilant.

Tavella's murder comes as doubts grow over whether a three-week tour by the Australian cricket team will take place.

The Australians delayed their planned departure to Bangladesh on Monday after being warned by its government that there was a potential security risk.

The murder and warnings from Western countries are ominous signs for Bangladesh, says M. Shakhawat Hossain, a security analyst and retired brigadier general.

"For some time, there was speculation that Islamic militants might target Western citizens in Bangladesh by the end of September. The murder shows the speculation was true," he said.

"An investigation will prove whether the Italian guy was killed by militants or not, but we can’t ignore the possibility. Due to the volatile political situation in the country, many fear that Islamic militancy is reviving and this might be just a small sign," he said.

"The murder is strange because Cesare Tavella was not a diplomat. Moreover, the red alerts from the U.S. and U.K. governments are dangerous signs for the country," said Fr. Rozario.

"The government should take the matter seriously and check on a possible militant link. It should ensure security for everyone and resist those who want to make Bangladesh an Islamic state," the priest added.

Considered a moderate Muslim country, Bangladesh has seen a rise in Islamic militancy since 2001.

Several militant groups carried out a string of bomb attacks across the country in 2004 and 2005, including attempts to kill the then opposition leader and current prime minister, Sheikh Hasina, of the Awami League Party.

One of them, Jamaatul Mujahedin Bangladesh, set up courts in northern parts of the country and publicly executed people for allegedly violating Shariah law.

The government initially denied the presence of Islamic militants in Bangladesh, but after a media outcry it banned Jamaatul Mujahedin and another group, Harkat-ul-Jihad, and arrested and executed their top leaders.

Bangladesh has also come under the spotlight more recently following a series of brutal murders and attacks on atheist bloggers.

At least four bloggers have been killed in the last 18 months, the latest being Niladri Chatterjee, 40, who was hacked to death in his home in Dhaka on Aug. 7 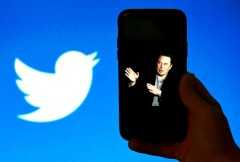 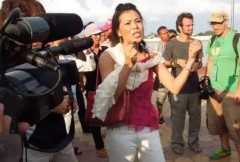 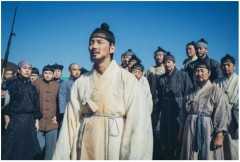 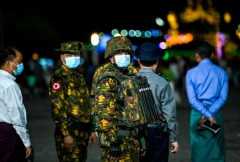