Killing for peace in the Philippines Polls show that Philippine presidential candidate Rodrigo Duterte has the support of 40 percent of voters, despite being a self-confessed killer and womanizer. (Photo by Vincent Go)

Almost three decades after overthrowing a dictatorship, the Philippines is once again flirting with strongman rule. Results of a national survey of presidential candidates found that close to 40 percent of voters prefer Rodrigo Duterte, the mayor from Mindanao who has publicly admitted to extrajudicial killings.

Duterte led in all economic classes. To the surprise of pundits his highest approval rating came from the more comfortable and better educated classes.

The rise of a self-confessed killer and womanizer, who utters a curse with every other sentence, is prodding the clergy and laity of the Catholic Church to re-examine their role in a democracy threatened by endemic poverty and human rights violations.

Filipinos came out in their millions this year to welcome Pope Francis. They praised the pontiff's every act of compassion. Why are they ignoring his admonitions against using violence to solve social woes?

Skewed power dynamics in the Philippines have fueled perverse aspirations among citizens. Duterte is strengthened by his detractors' failure to see their role in propping up these arrangements.

Aside from human rights activists, who have long tangled with Duterte, most attacks come from rivals in next year's presidential elections.

One is linked to an administration with an ugly human rights record and a penchant for quickly absolving allies accused of anomalies. The other faces plunder raps. One is supporting the son of a dictator. The "cleanest" among the candidates faces possible disqualification and there are growing doubts about her running mate and the backers he brings to her doorstep.

The feisty mayor presents himself as the people's wolf, a beast to turn loose on their perceived enemies. Hardly anyone is asking what happens when the people get on his ugly side. 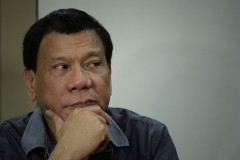 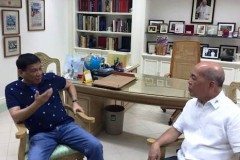 The problem is, that no politician presents an ideology or paradigm different from what Duterte espouses. There is only one face in the mirror. It is the face of injustice with roots buried so deep in the national psyche that it has become our normal. Duterte presents himself as the people's wolf, a beast to turn loose on perceived enemies. (Photo by Rob Reyes)

Even middle-class Filipinos, Father Alforque says, still have collective memories of what it feels to be poor and powerless.

Many of the victims of human rights and corruption are the rural poor — peasants and farmers — abused by landlords who also are corrupt politicians. Yet these same tormentors  are also their models.

There's no denying the perks and privileges of wealth and power. The horror of feudalism is the strong mesh of abuse and patronage that leave generations subservient, even thankful, for their oppressive state.

It is a duality that confuses because Filipinos have a rich legacy of struggle, against Spain, against the United States, against a dictator.

But the roots of power have always remained in the hands of a few powerful clans, notes Alex Lacson, a Catholic who campaigns against political dynasties and graft.

"The biggest obstacles to our nation's progress are our own leaders," says the author of the best-selling book "12 Little Things Every Filipino Can Do To Help Our Country."

The elite maneuvered their way around periodic uprisings, and used every regime change to consolidate their economic and political powers. The result: 178 families control 75 percent of Congress and 80 percent of all local government executive posts.

That, says Lacson, is why Congress ignores urgent measures like the Freedom of Information Act. The lords of the land use executive and legislative powers to award themselves hundreds of billions of pesos in discretionary funds. They use taxpayers' money for their foundations; use this to force voters to kneel for services that are theirs by constitutional right; disburse this as rewards to allies and to purchase votes or pay for fraud operators during elections.

Father Alforque, who heads an anti-pork barrel movement, says the problem raised by Lacson feeds the cycles of corruption. It gathered steam from urban migration, with the rural poor bringing their culture of submission.

Different place, but same set-up: Debts of gratitude and reliance on patronage.

In the Philippines, says Father Alforque, the rural landlord is the same urban politico strengthened by foreign investors and ally states focused on protecting their interests.

The country's churches are part of this power structure, with the Catholic Church near the apex, with the same complex history of struggle and collaboration.

From Spanish times to the incumbent administration, clergy, nuns and religious workers have worked for the oppressed and paid with their lives.

But the religious also have been linked to abuses, from the Spanish friars to the bishops who received expensive vehicles and other perks from former president Gloria Macapagal-Arroyo. Some clerics, Jesuits among them, supported Arroyo's draconian measures against activists and now encourage attacks on restive indigenous peoples.

Too many clergy seek favors from landlords, politicos and investors for charity and for the poor without addressing the need to change structures that violate human rights and which perpetuate corruption, says the priest.

Teaching people that suffering here on Earth leads to salvation of the individual soul in heaven only aggravates social injustice, he adds.

Whether by way of Spanish friars or U.S. and Western European Christianity and faith, different twists have the same result: "It transformed the indigenous peoples into English-speaking Christians who lived their Christian faith along the tenets of a neocolonial and imperialist arrangement."

Like many strongmen who rode to power on the wave of populist anger, Duterte exhibits enough outsider traits to attract those on the margins of power.

Crime terrorizes Filipinos across all economic classes. Fearing that corruption among law enforcers and civilian officials may be edging the Philippines to narco-state status, people latch on to Duterte's "zero-tolerance" policy on drug dealers and other criminals.

Duterte's followers believe he only kills "bad guys" and will continue doing so when he ascends to the nation's highest post. What they hope is, that he finishes off the abusers in government, or at least scares them into changing their ways.

It is a violent, utopian vision. History has shown that too much power corrupts even the well meaning and that peace-of-the-graveyard tactics only fuel rebellion and conflict.

Father Alforque admits the vacuum in alternatives. Politicians who denounce Duterte's atrocities support or ignore those done in the name of the system.

"They are all corrupt as the system is fundamentally corrupted and rotten," says the priest.

Former journalist turned human rights researcher Carlos Conde has harvested grief in his long coverage of Duterte. He says there is only one way to break Filipino's fatal attraction to the southern strongman: "Eliminate Duterte's reason for being."

"We need to fight crime legally, without committing more crime," says Conde. "If other candidates make a strong commitment, they might get a shot at preventing a civil liberties nightmare.

For that to happen, Filipinos need to upend traditional power roles and force their political bets to walk the talk.