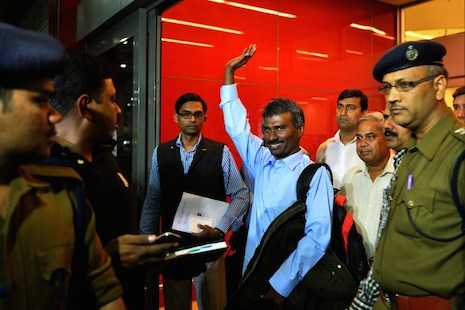 An Indian Jesuit priest kidnapped by suspected Taliban militants in Afghanistan eight months ago was released at the weekend and returned to India on Sunday, Prime Minister Narendra Modi and Church officials have said.

He said he had spoken with Fr Kumar and had informed the priest’s family of his safe return.

It is not yet clear how the Indian government managed to secure the priest’s release.

"For us he is an Indian national abducted and the government is relieved to see him back in the country," said an External Affairs Ministry official requesting anonymity because he is not authorized to speak to media.

"The rescue operation was undertaken with all sincerity at the highest level," he said on Monday, adding that Modi's National Security Advisor had coordinated the efforts.

He refused to reveal details of the release, including the possibility of a ransom being paid.

"[Fr Kumar] is in a hotel and is being taken care of by the External Affairs Ministry," Jesuit spokesperson Fr Joy Karayampuram told ucanews.com on Monday.

Arriving at Delhi airport, Fr Kumar thanked the Indian government and Modi in particular for his release.

"I want to thank the Almighty. Also this is because of our Prime Minister Modi that I am here," he told reporters.

"I am not ready to talk about what happened in Afghanistan. Though I had a bad time, now I am just glad to be here," he said.

Fr Kumar "is absolutely fine. He is a little thin but he is in good spirits and good shape," said Fr Joseph Xavier, a Delhi-based Jesuit who was at the airport to meet the priest.

Fr Xavier was among 15 Jesuits at the airport to meet the former captive.

He said the government informed Jesuit representatives about the release and the priest’s arrival home about two hours before Fr Kumar’s plane landed at about 7:30 on Sunday evening.

Despite his ordeal, Fr Kumar said he was ready to return to his Afghan mission if his superiors allow him to, according to Fr PR John, a Delhi-based theology professor who was among those at the airport to meet the priest.

He is not afraid of the war-ravaged country where the Jesuit Refugee Service (JRS) runs educational and social service projects, Fr John said.

Fr Kumar had been JRS director in Afghanistan for five years when he was abducted on June 2 last year in the Zendjan district of Herat province while visiting a school.

After talks with Fr Kumar, the Jesuits will evaluate lessons learned from the abduction and any conditions regarding his release to consider whether policy changes are needed in their mission to Afghanistan, he added.

Media reports earlier suggested that the Taliban abducted the priest because of their opposition to the education of girls.

However, Jesuit officials said on Monday that they were never told why Fr Kumar was kidnapped or what efforts were undertaken to secure his release.

"We have absolutely no information on such issues. But we know government officials at a high level worked for his release," Fr Karayampuram said.