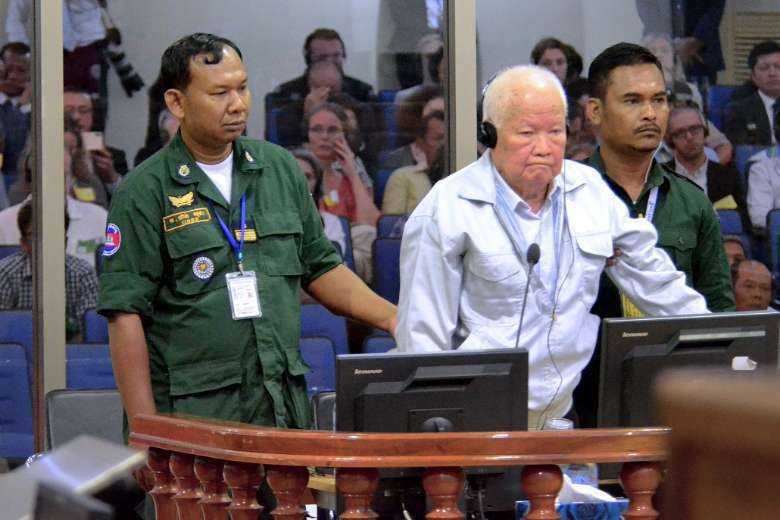 Former Khmer Rouge head of state Khieu Samphan stands during his verdict in court at the ECCC in Phnom Penh on Nov. 16, 2018. (Photo: ECCC via AFP)

The last of Pol Pot’s surviving henchman, Khieu Samphan, is expected to deliver his final defense in his appeal against convictions for genocide and crimes against humanity when the Khmer Rouge tribunal begins its last public hearings in Phnom Penh next week.

A bench of Cambodian and international judges will then deliberate on the 90-year-old’s appeal at the Extraordinary Chambers in the Courts of Cambodia (ECCC) and then start finalizing its legal work which began more than 15 years ago.

The ECCC has also secured convictions against the former commandant of the S21 torture and extermination center, Kaing Guek Eav — commonly known as Duch — and former brother number two Nuon Chea. Both died behind bars.

Others, including Pol Pot’s former foreign minister Ieng Sary, his wife Ieng Thirith and former military chief Ta Mok, died behind bars before a verdict could be reached for the deaths of up to 2.3 million people who perished in Cambodia between 1975 and 1979.

Legal sources at the tribunal said outstanding cases were also expected to be dealt with, including former commanders Meas Muth and Yim Tith, which remain in a legal limbo with Cambodian and international prosecutors divided over whether to proceed.

“This will be the last of the public hearings,” said a legal source who declined to be named. “It’s significant and because of the nature of this court there has been many precedents set which need to be worked through for future generations and future trials like this.”

Critics have argued the tribunal, which to date has spent about US$330 million, was too expensive given so few convictions

Hearings will begin on Aug. 16 with up to nine days reserved to finalize outstanding issues before the UN-backed courts head into recess.

Twenty-five years ago, few thought a UN-backed tribunal would happen at all, with Pol Pot — who died under house arrest in 1998 — and his henchmen living freely in Cambodia’s remote west.

Critics have argued the tribunal, which to date has spent about US$330 million, was too expensive given so few convictions. But others note that sum equates to about $200 for every person who perished under the regime.

As Helen Jarvis, former head of the ECCC’s victims’ unit, recently noted, that cost does not include the pain and suffering endured by the millions who survived the barbarity inflicted upon them by the ultra-Maoists who sought to establish an agrarian utopia.

The tribunal’s supporters also say the ECCC has brought many benefits.

Khmer Rouge history is now written into the school curriculum and their atrocities recorded in international law. Families torn apart by the ultra-Maoist regime and a 30-year civil war have been reunited and one of the darkest chapters of the 20th century consigned to history.

But it was the evidence and the chronicling of Pol Pot’s atrocities which gripped Cambodians and international observers alike, particularly M13, a death camp built in a communist-controlled area in 1971 which would serve as a prototype for what was to come.

Duch described M13 as a place “to detain, to torture, to interrogate and finally to smash and kill” and it would serve as a model for S21 and a total of 196 such camps across the country that were established after Pol Pot seized power four years later.

The remains of hundreds of thousands of people remain where they perished as evidence for the tribunal and once the ECCC shuts down are expected to be cremated in accordance with Buddhist traditions.