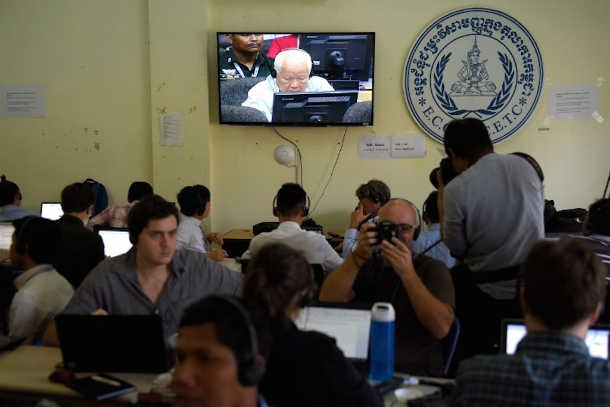 Journalists observes the verdict of former Khmer Rouge leader Khieu Samphan shown on a live video broadcast in the press room of the Extraordinary Chambers in the Courts of Cambodia in Phnom Penh on Nov. 16. (Photo by Tang Chhin Sothy/AFP)

Former head of state Khieu Samphan sat motionless while Nuon Chea, known as Brother Number Two, watched from a holding cell after claiming he was too ill to sit in court, as Judge Nil Nonn read the verdict and handed them an additional life sentence each.

Both men were found guilty of crimes against humanity and sentenced to life behind bars in 2014. Today the court ruled that both life sentences were to be merged into one.

Judge Nil Nonn said the Khmer Rouge had instituted a policy to establish an homogeneous society by removing class and ethnic differences, where Nuon Chea "enjoyed oversight" while Khieu Samphan had "condoned and endorsed the common purpose."

"The Chams were targeted not as individuals but as member of their group," he said. "Orders targeting the Cham came from the upper echelon."

They were also convicted of further charges relating to crimes against humanity and grave breaches of the Geneva Convention covering forced marriage and rape, and the repeated and forced movement of people from cities and towns to the countryside.

Judge Nil Nonn said this encompassed murder, extermination, enslavement, persecution on political and religious grounds, torture, inhumane acts and forced disappearance, which occurred in cooperatives and on execution sites established around the country.

"There was a widespread and systemic attack on the people of Cambodia and it took many forms," he said. "This attack victimized millions of civilians in Cambodia and resulted in a large number of refugees fleeing to neighboring countries."

More than 180 witnesses testified before the Extraordinary Chambers in the Courts of Cambodia (ECCC). Tens of thousands of documents were submitted covering crimes committed between 1975 and 1979 when some two million people perished.

The court heard how Muslim Chams were forced to eat pork. Their traditional language was banned. Qurans were collected and burned as they were rounded up by a Khmer Rouge unit known as the Long Sword Militia.

Cham and Khmer women were often stripped naked and raped before they were killed, while cadres held competitions to see how many prisoners could be murdered in an hour at Wat Au Trakuon, where up to 20,000 died.

Buddhism was banned, Buddhist symbols destroyed and pagodas abandoned while monks were forcibly disrobed, Judge Nil Nonn said as he described a pattern of inhumane treatment.

He said Vietnamese and former government officials were often labeled as spies and their fate was a foregone conclusion.

"Workers were held in slavery and forced to work. They were told those who disobeyed would be removed or killed," Judge Nil Nonn said. "Their lives were expendable."

The court also heard how groups of people were killed at the S-21 torture and extermination camp in Phnom Penh under the instructions of Nuon Chea.

Judge Nil Nonn said prisoners were handcuffed, blindfolded, shackled, beaten, subjected to electric shocks, and suffocated. Others had their toenails and fingernails extracted. Some prisoners died after their blood was taken to provide transfusions for wounded Khmer Rouge soldiers.

Kaing Guek Eav, or Duch, was in command of S-21. He was convicted of crimes against humanity and grave breaches of the Geneva Convention in 2010.

Under his control and in line with Nuon Chea's orders, more than 20,000 people were tortured and processed for death at nearby Choeung Ek, where prisoners dug their own graves, were bludgeoned with an ox-cart axle, had their throats slit, and were disemboweled.

At least 200 similar camps were established around the country.

Genocide charges, known as the "crime of crimes" were keenly sought by prosecutors amid hope of delivering some kind of justice for the victims.

Former foreign minister Ieng Sary and his wife Ieng Thirith, the former minister for social affairs, were also charged with genocide but both died before the trial was completed.

Further cases are pending against lower-ranked members of the Khmer Rouge.