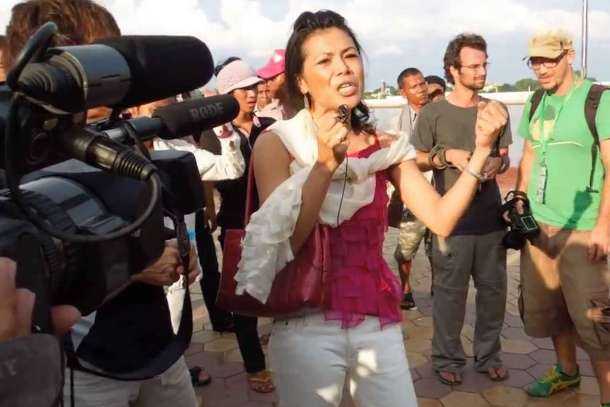 A prominent Christian and pro-democracy activist has been charged with treason after backing a failed bid by Cambodia’s opposition leader-in-exile Sam Rainsy to return home where he planned to stage widespread protests.

Theary Seng, whose work includes editing the Khmer version of the Bible, is among 55 people who will shortly face a court and the prospect of 12 years in jail for conspiracy to commit treason and incitement to commit a felony.

“[Cambodian Prime Minister] Hun Sen and his cronies are afraid of Sam Rainsy returning to continue to do politics in Cambodia,” said Theary Seng, adding she was prepared to go to jail.

“The first attempt, which saw a lot of international support, occurred in November 2019. I was involved with the ‘nine fingers’ campaign and, as you may remember, Hun Sen threatened anyone who showed nine fingers with cutting them off. It only made me want to advocate the return some more, which I did.”

The nine-finger gesture represented Nov. 9 last year, the day Sam Rainsy had promised to return from self-exile in France. It became a popular salute among his supporters in Cambodia.

Theary Seng must front the court with other supporters of the banned Cambodian National Rescue Party (CNRP) on Nov. 25.

The CNRP, headed by Kem Sokha and Sam Rainsy, went tantalizingly close to winning the popular vote at the 2013 election. They refused to accept the result and widespread protests followed that turned deadly.

A subsequent crackdown resulted in the CNRP being dissolved by the courts, Kem Sokha was detained on treason charges while Sam Rainsy fled to France. The ruling Cambodian People’s Party (CPP) then won every seat contested at the 2018 election.

Sam Rainsy’s attempted return was thwarted by neighboring countries that denied him access to their Cambodian borders or flights into Phnom Penh. Last month he again said he would return to Cambodia but declined to say when.

Theary Seng, an American-Khmer lawyer, was a prominent supporter of Sam Rainsy but toned down her activities after venturing into publishing, focusing on Khmer translations.

“I think they are charging me now because there are no civil society leaders or union leaders who could help mobilize because these leaders are either detained or exiled,” she said.

Sam Sokong, a defense attorney, says more than 200 people have been arrested, charged and jailed for plotting against the government, many of them from the CNRP.

Independent trade unionists, journalists and bloggers have also been arrested with summonses issued for CNRP politicians and supporters who fled abroad. Some have received travel bans, preventing their return.