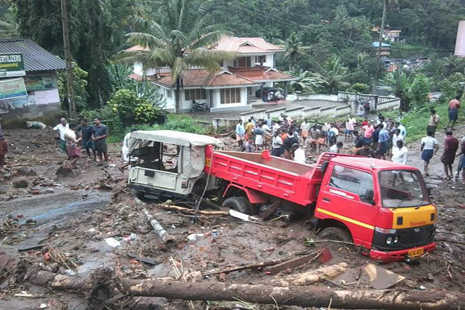 The aftermath of a landslide in Idukki, Kerala

Flash floods and landslides have left at least 20 people dead and 20,000 displaced in the southern Indian state of Kerala.

Authorities shut Kochi airport yesterday following torrential rains, while the government has opened the majority of dams that neared their maximum capacity, causing rivers to burst their banks.

The Kerala State Electricity Board, which oversees most dams, said in a press release that the "water storage capacity of all the reservoirs reached 86 percent in the state," which was "unprecedented" for this time of the year.

Most deaths were reported in the hilly Idukki district, where several landslides and flash floods have occurred. At least 14 people, including some rescue workers, were buried alive in there, officials said.

"Idukki has been cut off due to landslides in several locations. National disaster Management Authority has dispatched four teams for rescue operations,” Chief Minister Oommen Chandy told ucanews.com before leaving for Idukki today.

Chandy has convened an all-party emergency meeting for today to discuss the area’s worst floods since 1991, which have adversely affected road and air traffic.

“Around 56 international flights were cancelled and some of them were diverted to other airports. We hope to resume flight operations by Tuesday evening,” an airport authority press release stated.

Local leaders say people fear more landslides in the hills. “Most of the towns have been flooded in the area. People are scared. If the rains continue for another day, more landslides will happen,” said S Rajendran, a legislator from Idukki, told ucanews.com.

P Chandrashekharan, from the Fire and Rescue Department, said that 10 vehicles are suspected buried in the landslides.

In the Kuttanad area, 90 percent of the region is under water, according to Thomas Isaac, the former finance minister of Kerala.