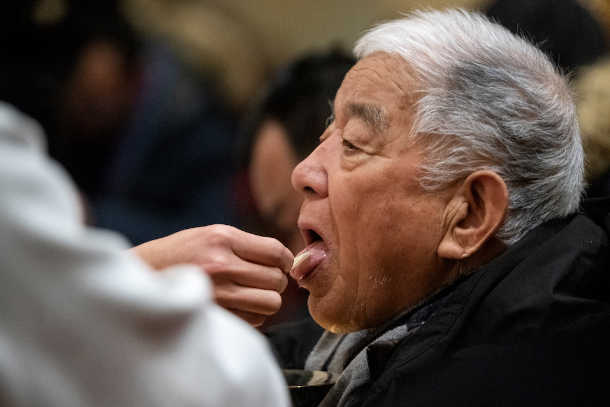 A worshiper receives Communion as he attends a Christmas Eve Mass at the Xishiku Cathedral in Beijing on Dec. 24, 2019.
(Photo: Noel Celis/AFP)

The Kerala High Court in southern India has dismissed a petition seeking a ban on the distribution of Eucharistic bread and wine in churches.

The Qualified Private Medical Practitioners Association, an association of medical professionals in the southern state, petitioned the court saying the practice was “unhealthy and posed a serious health hazard to the general public, especially the communicants.”

The judges dismissed the petition saying the reception of Eucharistic bread and wine, also called Communion, was a matter of faith and the free choice of Christians.

“The petitioner has no case that consequent to the receipt of Holy Communion, any persons were inflicted with communicable disease and therefore it is not for the court of law to interfere with the centuries-old practice,” the court said.

The court’s decision began to be discussed as India reported the first case of deadly coronavirus on Jan. 30, confirming the infection of a medical student in Kerala who had returned from Wuhan, the Chinese city where the contagion was first reported a month ago.

The female student “was quarantined along with four others in isolation … she is is stable; there is nothing to worry,” said Kerala Health Minister K.K. Shailaja.

The court judgment, which came when the media began to report the spread of infection, observed that Eucharist is a matter of Christian faith and “not compulsory.” Some receive it regularly, some more often, and some less often, the court noted.

Christian denominations have “different approaches concerning the administration and receipt of the holy sacrament. However, it is never compulsorily insisted upon, and the believers receive it due to their absolute faith as followers of Christianity,” the court reasoned.

The petition also said the practice followed in the majority of the Christian churches in India in respect of holy sacrament is that the priests serve wine from a single chalice using the same spoon into the mouth of every communicant.

The petitioners said Eucharistic wine is shared from the same cup, some using the same spoon without cleaning, which “gives rise to a very high possibility of saliva contamination.”

The priest distributing Eucharist bread on the tongue also allows saliva contamination and ought to be avoided to check communicable diseases.

The petitioners said they approached government authorities, especially the food and safety department, seeking action, but to no avail.

The court said that the Food Safety Authority “is not vested with any powers to interfere with the distribution or administering the holy sacrament in churches.”

Father Antony Thalachelloor, spokesman of the Syro-Malabar Church in Kerala, said the petitioners acted “out of their ignorance. If one reads the petition they presented, it sounds as if Communion is a sort of big feast where different dishes are served.”

“Raising the question of hygiene on the distribution of Communion and sacramental wine itself is a clear indication that the petitioners knew nothing about Holy Eucharist, which is a very important and pious aspect of our faith,” he told UCA News.

The priest also lauded the court for “taking a right stand and dismissing the petition.”

Meanwhile, Kerala officials said five students who had returned to their home state from Wuhan had gone to hospital of their own volition.

Efforts are also underway to identify all those people who came into contact with them following their return from China to put them under surveillance.

Federal officials said all those who have come from China after Jan. 15 will be observed and tested as the virus has an incubation period of two weeks.