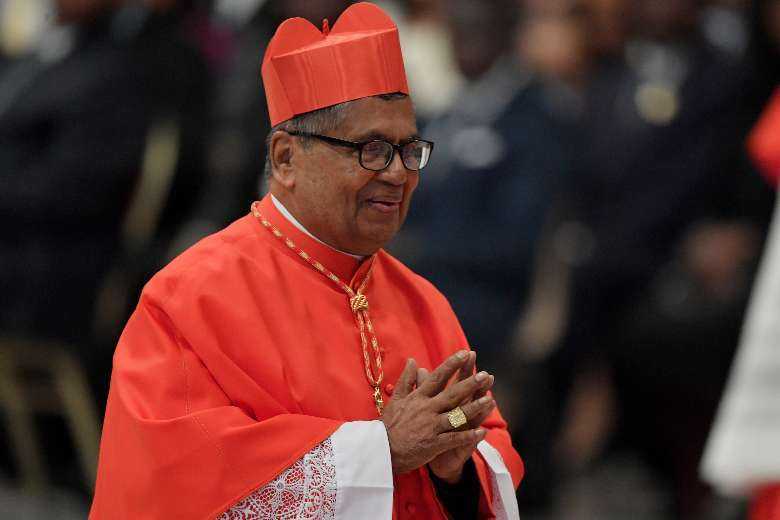 Archbishop Anthony Soter Fernandez of Kuala Lumpur on the day he became a cardinal during a consistory at St. Peter's Basilica at the Vatican on Nov. 19, 2016. (Photo: AFP)

The legacy of Malaysia’s first cardinal, Anthony Soter Fernandez, has been brought alive in the form of a book containing tributes and memories of people from all walks of life.

The book, titled The Cardinal: The Life and Times of His Eminence Anthony Soter Cardinal Fernandez, was launched in Selangor near the national capital Kuala Lumpur on March 31 in the presence of church leaders, family members and friends, the Herald Malaysia reported on April 1.

“Cardinal Soter’s vision was so pastorally oriented as leader of the Church, not only in Malaysia but also in the region,” said author E. Samson, who spearheaded the book project sponsored by the Catholic Research Center in Kuala Lumpur.

“He had a vision that was so farsighted. He didn’t think in a singular way but thought holistically. He didn’t just have one focus in mind, he had many things that built up the Church.”

Retired Brigadier General Richard Robless said Cardinal Soter was a pioneer of Catholic education in Malaysia, recalling how a conference of Catholic educators, religious teaching congregations and laypersons convened by him in 1987 led to the formation of the Malaysian Catholic Education Council and, subsequently, the birth of the archdiocese’s agenda in private education.

The first Stella Maris school opened its doors in 1994 in Jalan Robertson, Pudu. Encouraged by the success of this first school, Cardinal Soter initiated the incorporation of the Yayasan Tan Sri Dominic Vendargon Foundation, which now owns and operates four private schools, including one that offers an international curriculum.

“This is his legacy. This is his testament. And while we may have lost our mentor, we look at what he has left and stand thankful and grateful to God for this great and loyal servant of his,” the former military officer said.

Archbishop Julian Leow of Kuala Lumpur said he hopes the book will serve as a historic legacy for the younger generation and for those who may not have had the opportunity of knowing Cardinal Soter.

“Let us continue to keep alive this legacy that Cardinal Soter has left us. Let it not die but let it continue to grow and to bloom … Interfaith dialogue and ecumenism were foremost in Cardinal Soter’s mind to build the Church and to contribute to the growth of this nation,” the prelate said.

During his two decades as the archbishop of Kuala Lumpur, he spearheaded the Second Vatican Council's idea of aggiornamneto (updating) of the Church. He initiated the Renewal Parish Project in 1983.

Cardinal Soter was a leading figure on the Malaysian Consultative Council for Buddhism, Christianity, Hinduism and Sikhism, serving as its president in 2001.

He strongly promoted interreligious dialogue and made efforts to engage with Islam in the Muslim-majority nation.

The cardinal was a vocal critic of detentions without trial and declared as "immoral" the Internal Security Act of Malaysia that empowered authorities to detain suspects without criminal charge and hold them without trial.

He was chairman of the human development office of the Federation of Asian Bishops' Conferences (FABC) and the national bishops' conference's commission for interreligious affairs.